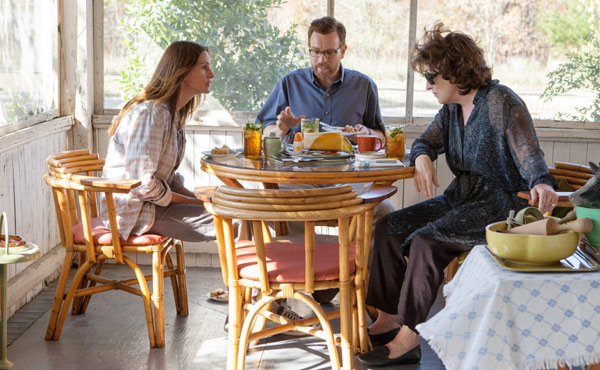 
A new drama with histrionics starring Meryl Streep and Julia Roberts in their first on-screen pairing under the direction of John Wells (The Company Men) allows Tracy Letts' downsized three-hour play to let loose with some of the theatrical tough-talking fury of Edward Albee and Eugene O'Neill.

"August: Osage County" (with its stage roots fully intact) opens up in widescreen in a small, rural Oklahoma town to get down and dirty for the Weston family reunion after the burial of heavy-drinking, ruminating patriarch Beverly (Sam Shepard) presumably from his own hand. He has told his Native American cook/housekeeper Johnna (Misty Upham) of his transgressive ways and of his drug-addled wife Violet (or 'Vi').

A convocation of family members from Colorado, Florida and Oklahoma will have to deal with the rancor of a chain-smoker with oral cancer at the homestead filled with pervading sonorous accusations and subsequent revelations.

For the funereal to-do and backstabbing antics are the daughters from oldest to youngest - Barbara (Roberts), Ivy (Julianne Nicholson of The Amazing Spiderman), and flighty Karen (Juliette Lewis of Conviction). Violet impresses on Barbara that she is an ungrateful person who left the family and abandoned her father under bad terms. She comes in tow with estranged husband Bill (Ewan McGregor) and 14-year-old pot-smoking daughter Jean (Abigail Breslin).

Ivy unveils a boyfriend "Little" Charles Aiken (Benedict Cumberbatch of Star Trek Into Darkness, The Fifth Estate and 12 Years A Slave) who has missed the funeral due to his difficulty with punctuality. The apparent ne'er-do-well happens to be her first cousin with his parents - Charles (Chris Cooper) and Mattie Fae (Margo Martindale) among the guests on an occasion that would possibly lead to the heartwarming. Letts hits on the guilt-trips found in the works of Arthur Miller and the raw Southern Gothic tendencies of an estimable Tennessee Williams.

Dermot Mulroney (who played opposite Roberts in her comeback film My Best Friend's Wedding) shows up as Karen's hustling fiance Steve whose illicit ways definitely irk Johnna. There are opportunities for levity amid the brawling (dishes are fired around the room) and intense in-your-face melodrama to uncover family surprises including one with Charles and Jean. But, Cooper and Martindale have a strong barbed interlude after the extended pre-dinner grace Charles delivers when it comes to an inured "Little" Charles that has the kind of wrenching poignancy that Wells doesn't quite manage to pull off as a whole.

Nevertheless, the viciously bilious Streep (who probably finagles qualities of earlier roles like the lesser known Marvin's Room into this riddled character) with its sensitive, self-effacing strands still has quite the presence, especially opposite Roberts in a gradual, gritty portrait with more dramatic pull than expected. Beside the aforementioned Cooper and Martindale who really connect with the material, Nicholson makes for an affecting, persuasive Ivy. Maybe it's only McGregor whose Bill sticks out unconvincingly in an undernourished kind of way.

Yes, August: Osage County can be misleading from its marketing in the way it sheds light from the philosophizing to make being with extended family a less than inviting proposition. Even if the sum doesn't match its share of individual parts many of which are dispensed with venomous verve if not for a certain cause it's a prolonged wave that an overmedicated Streep and a loathing Roberts (parts of Barbara echos of her straying photographer in Mike Nichols' Closer also based on a play) exude fully and frightfully.