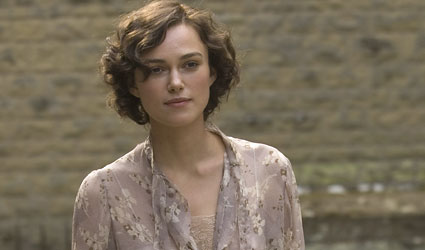 
Atonement is a complex, steadily absorbing triptych benefitted with strong writing and direction. There are hardly few hiccups on hand for those discerning audiences looking for quality drama this holiday season.

The maker of Pride & Prejudice, Joe Wright, has his way with Ian McEwan's dense dynamic book, and his capable English cast, led by rising performers in Keira Knightley and James McAvoy.

A very summery mid 30s day at an English manor is the setting where young teen Briony (Saiorse Ronan) is beguiled by those "adults" around her. Most notably, the meetings of her older sister Cecilia (Knightley) and the working-class Robbie (McAvoy) who is a family friend.

The sensible scripting by Christopher Hampton hinges on how Briony reacts to what she has witnessed. The story goes through World War II when she (now played by Romola Garai) undergoes a change when becoming a nurse. And, finally when she reaches a personal catharsis as a novelist (the wonderful Vanessa Redgrave).

One is drawn to the central roles of Cecilia and Robbie, but having the perspective of Briony brings something more provocative to what may sometimes seem askew. How the war affects these folks is strikingly conveyed in scenes like the Dunkirk encampment through at least one sharp tracking shot.

Like his adroit interpretation of Jane Austen, Wright knows how to exact the right stuff from his crew to realize the experience of emotional highs and lows. With atmospheric lensing to heighten the lighting and effective transitioning, as well as a score that nearly always soars. Perhaps less emphasis on Briony at the typewriter would have been a better touch. Thus, the way in which the plot manifests itself allows for rich, internalized characterizations to emerge.

Knightley and McAvoy have the on-screen thing that has a magnetic effect understating how penetrating and haunted both of them are given how life has changed for them. A fine, self-effacing, curious continuity for the Briony character is essayed by Garai and bright newcomer Ronan. While Brenda Blethyn is decent among a solid core of backup as Robbie's cook of a mother, Redgrave adds more balance and luster here (than in the beautifully mounted, yet unsatisfying Evening), especially at the moving conclusion.

In Atonement something so naive becomes quite an albatross for a family, and if some instances are weakly rendered, it never dwells on them. Wright eradicates any culpability with his craftsmanship in handling indelible struggles of seemingly simple folks before, during, and after wartime.