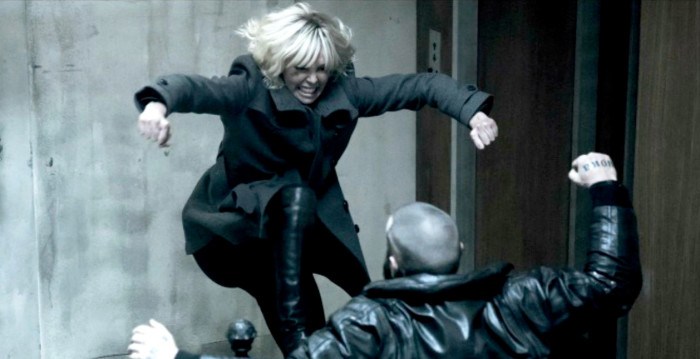 
The most notable thing about this film is the incredible intensity of the action sequences.  Lorraine Broughton played by Charlize Theron, is on a mission to Berlin.  The time frame is the year the wall came down for good.  She has been given a mission to complete, and she is determined to succeed.  There are lots of intense struggles through out the film.

Lorraine is dispatched her foes with guns, shoes, hand to hand combat, and her own willpower.  There are several high speed car chases, lots of enemy agents to overcome, and a high number of shots of stoli on ice to be consumed.  Theron who has been compared to James Bond is really great in the action sequences.  She probably eliminated twenty opponents in the first half of the film.  I found her commitment in the hand to hand work to be convincing, and I was amazed she could change from relaxation to combat person so quickly.  Action scenes were believable as she got past, through and around her opponents with skill an dexterity that staggers the imagination.

Her only fault lays in her many shots of Stole on the rocks.  She never sips this brew.  Down the hatch it goes and lets have a refill is her motto.  The multitude of drinks never impaired her functionality.  I was truly impressed when four people were sent to eliminate (murder) her and she got all four with a gun hidden in her ice bucket. She then shot two or three more, for good measure.  I also enjoyed the performance of John Goodman as the CIA director, he was smooth, polished and functioned at his usual high level.

I rate this film as a straight B.  It was certainly violent and I am still not sure who were the good guys. I am also sure that one should never underestimate the Atomic Blond Hope they make a sequel.