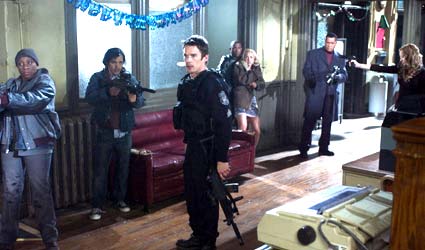 Ethan Hawke stars as Sgt. Jake Roenick, a Detroit cop who works at a rundown precinct about to be closed down.

He was injured in an undercover drug bust a couple of years before and now bides his time numbed by painkillers and booze. He’s content to just let the time pass working at a desk job.

It’s New Years Eve, there’s a wicked snow storm outside and Jake and two of his co-workers, a retiring cop (Brian Dennehy) and a sexy secretary (Drea de Matteo) along with Jake’s psychiatrist (Maria Bello) are about to have a couple of drinks to ring in the New Year and close up before they go home.

Their plans change dramatically however, when a police bus carrying small time crooks and Bishop (Lawrence Fishburne) a major local mobster gets re-routed because of a bad accident which closes the road. Jake has no choice but to put the criminals in the dilapidated cells until morning.

Matters soon turn ugly when a bunch of black ski-masked, heavily armed men descend on the precinct and Jake is forced to take charge inside before everyone is killed.

The film has all of the necessary elements of a good thriller, a small number of people who are woefully under-armed, are attacked by a larger group, bad weather closes the roads so there’s little chance of escape and the storm knocks out the phone lines, it’s a prescription for disaster.

The plot may seem familiar as this is a remake of John Carpenter’s 1976 film of the same name, and the scenario for a number of John Wayne westerns.

Fishburne is believable as a menacing mobster and Hawke has just the right mixture of part loser who has given up and one who steps up to the plate when he’s called upon.

Although I could have done without the non stop swearing and violence, director Jean Francois Richat delivers a thriller with good performances, plenty of action and a couple of surprises.