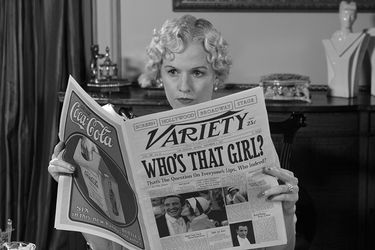 
Shot in Hollywood to reflect a monochromatic world of a medium with its light and shadows, this nearly silent picture is old-fashioned in the best sense of the word while sparkling with creativity and prescience.

The Artist features Jean Dujardin, Berenice Bejo, and Uggy the dog, and takes place in 1920s Hollywood while inspired by memorable films like Singin' In The Rain and A Star Is Born and features title captions for its line readings.

Dujardin's George Valentin is a silver screen star with his trusty canine partner Jack (Uggy). The screenplay by director Michel Hazanavicius has George taken aback by alluring ingenue Peppy Miller (Bejo, the wife of Hazanavicius) and helps her move up in the business on the dancing end. He's careful about his inhibitions given that he has a spouse in a somewhat uptight Doris (Penelope Ann Miller).

The spry story hinges on what happens with the arrival of sound in motion pictures (1927-1931) as George descends from stardom but goes on to finance and direct a jungle adventure figuring sound and dialogue on celluloid won't last very long. However, his project bombs and the impending Wall Street Crash proves more than liquidating. On the other hand, Peppy turns out to be the new "It" girl for the studio as she looks to be hitting her stride in the "talkies."  But, there may be a strange serendipity in order for two souls headed in different directions.

Dujardin and Bejo have a very palpable rapport, as the former has that Golden Age appeal of a Douglas Fairbanks and Gene Kelly with distinctive comedic and physical prowess (very light on his feet). Hers is an aura that feels like a cross between Gloria Swanson and Marlene Dietrich with an endearing smile. Fine back-up is evident from more recognizable thespians of mainstream cinema when John Goodman appears as Valentin's producer and studio boss and James Cromwell as his faithful chauffeur. Yet, Uggy sparkles in front of the camera so much so that he nearly steals every scene he's in; it's hard not to like what he does with George opposite a dour Doris at the dinner table. Seeing how George experiences the new change in the industry and a lost weekend has a surreal touch about it.

What comes across as much more than a lush yearning to the silent era (without trying to send them up), is the wit and intelligence Hazanavicius imbues (with much affinity) through the storytelling and production crew with craftsmanship of the highest order when it comes to sound stitching of scenes, design, set, and art direction accentuated by a current vantage point. It adds up to a genuine affection of cinema itself with sight gags and references that might not be fully appreciated on an initial viewing experience.

Hardly predictable and occasionally arousing much laughter, The Artist (which regrettably may not expand beyond the art-house circuit) is imaginative and wondrous leading to a coda surely able to lift up even those Scrooge types or those often stressed during another recessive holiday season. With first-rate filmmaking augmented by the lensing and the terrific presence of relative unknowns like Dujardin and Bejo, a joyously nuanced proficient potpourri speaks loudly as an instant silver screen classic without saying anything at all.