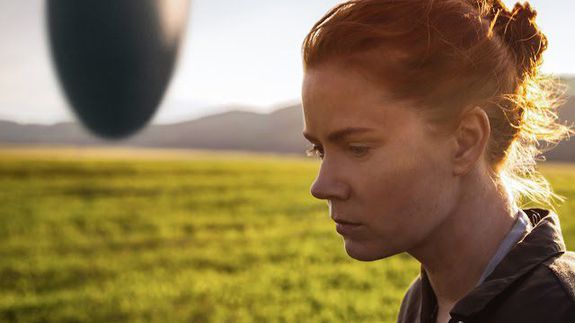 Arrival, starring Amy Adams, Jeremy Renner, and Forest Whitaker deals with mysterious extraterrestrial encroachment in a dozen locations around the globe in a distinctive way that some may attribute to forerunners like Close Encounters of the Third Kind or Contact. A wise movie geared more for the adult crowd is reflected in Eric Heisserer's screenplay adapted from a short story, Story of Your Life.

An elegance to the craftsmanship is evident even with an unvarnished look as the real tension is set to a small portion of the film with the spectacle more emotionally driven than by CGI. Adams's Louise is an academic, a linguistic expert, and Villeneuve makes language and its structure prominent in communicating a richly thematic tale, magnifying a cerebral conceit, even exacting recollections that help garnish the proceedings.

Louise is enlisted to head to the Montana location at a post where one of the otherworldly vessels has positioned itself at the insistence of Whitaker's Col. Weber, not the usual tough-guy military role. The goal being to interface with them and understand their objective, unlike the big question assumed in this unusual, arguably cataclysmic situation.

At points, Arrival may not be on the firmest footing even before the Octopus-like beings (with witchy fingers for their lower extremities) who can intone in lethal ways appear, but a realism supersedes the apparent wonder of it all even with surreal touch dealing with loss and love.

As depicted in an early flashback, Louise is coping with her daughter succumbing to a rare disease that folks like a scowling CIA agent (Michael Stuhlbarg) are not debriefed about. But, seeing her teaching her own child human expression from the past before the suffering commenced isn't really unlike what she has to do with these visitors.

Having her American Hustle co-star Jeremy Renner aboard as a coy, down-on-linguistics theoretical physicist Ian is a good thing for Adams, as they enjoy a complaisant rapport. Especially in his more secondary, but lighter role exemplified by naming a couple of the visitors Abbott & Costello, being reminded of the old "Who's On First" routine.

Ultimately, in its taut deliberations Arrival is not nearly as despairing as Villeneuve's deftly made drug-cartel thriller Sicario or equally involving kidnap drama Prisoners. Here is an irreproachable genre representation in large part because of Adams's undaunted woman who reels and probes with uncanny alacrity.