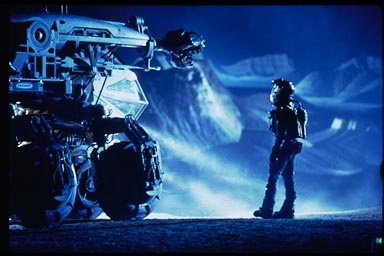 As the Earth faces Armageddon, Dan Thurman (Billy Bob Thornton), the executive director of NASA, decides that Harry Stamper (Bruce Willis) and his oil drilling crew are the men to save the Earth.  Ignoring astronauts and the military, Thurman places the future of the world in the hands of a man who spends his spare time driving golf balls at Green Peace ships which protest the presence of his drilling rigs in the middle of the ocean.

The asteroid that Stamper's crew is sent to intercept is large enough to destroy all life on the planet.

Following the catastrophe formula, half of the film introduces the problem and the characters and the second half provides the excitement and action.

Willis plays the hard nosed, get-it-done guy.  Thornton is the NASA executive director who develops and puts into effect the plan to explode a nuclear weapon inside the asteroid.  Ben Affleck is Dan Truman, Harry's protege who is in love with Grace Stamper (Liv Tyler), Harry's daughter.  He is wimpy and she is sugary sweet.  Steve Buscemi, on the other hand, delights as a free spirit with an unstable edge.  He borrows $60,000 from a loan shark to spend on booze and strippers, figuring he will never have to pay it back.

Armageddon is a wild circus ride that'll keep you on the edge of your seat.