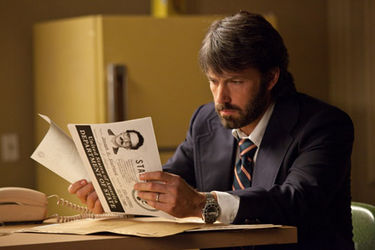 
Another adept thriller that has the feel and look of those old character-driven pieces in the late 1970s (in which its set) shot in Istanbul, Los Angeles, Washington D.C. and Langley, Va. sashays persuasively from wit to pathos. Even if it has its way with the actual "declassified" events on which its based.

Ben Affleck (sporting a convincing shaggy, hirsute look) directs and stars in Argo; his first foray out of Beantown (after distinguished efforts like The Town and Gone Baby Gone) packs a credible, authentic punch in fast-paced style. His way with Chris Terrio's expressively nuanced script from The Master in Disguise and a Wired Magazine article entitled The Great Escape adds up to more than a cunning combination of movies like The Kingdom and Spy Game. A unified vision here has the director in total control of a brainstorm that relates a chaotic extraordinary time with intimate verve.

His CIA 'ex-filtration" specialist Tony Mendez hangs on to a bottle of whiskey and has a fantasy-film of a son must do more than provide bicycle spies when six diplomatic workers are hiding out in Iran after vengeance-minded, armed Ayatollah backers stormed the U.S. embassy there.

The proceedings in the earlygoing are instilled with more levity as Mendez comes up with a unique way to help those staying at the Canadian ambassador's residence. He'd go to Tehran with some fake passports and make authorities aware that the workers are actually part of a Vancouver film crew doing location work for a titular sci-fi picture with a Middle-Eastern slant.

To spruce up his scheme, Mendez needs some Hollywood backing (and some necessary trappings), so he hires a producer, Lester Siegel, evinced with spry cynicism by Alan Arkin, as well as make-up effects artist John Chambers, sharply handled by John Goodman. A production company will be established to promote the film with advertising in a major industry trade publication, a public read-through and a cocktail party.

Arkin and Goodman, in particular, have to be commended in their ability to provide big humorous moments, especially the former in Lester's natty bumptious demeanor. A very sound character actor ensemble is important to Affleck's way to augment the vibrant, vital period look with Bryan Cranston (TV's Breaking Bad) as Mendez's jaded supervisor, among other small turns from actors like Scoot McNairy and Clea DuVall. No need to get more into a narrative where Mendez has to be delicate about his Canadian movie producer and the intensity is more palpable when flying alone to Tehran with angst-ridden folks hanging in the balance.

So, this behind-the-scenes of the Iran Hostage crisis ultimately makes its own cry for pacifism through Affleck's subtle, understated protagonist whose milieu is of the affectedly quaint. A warmth of humanity bristles through the unnerving suspense that creatively uses Hollywood, Washington and Tehran, as well as the characters themselves in the slick editing by William Goldenberg. In the end a finely taut Argo may have certain distracting qualities for cineastes, but much more enticing ones to lure adults at the multiplex for another exciting, compelling experience that a confident Affleck provides in front of and behind his disarmingly distinctive lens.