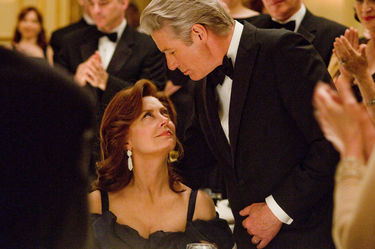 
Nicholas Jarecki, brother of filmmakers Andrew and Eugene, puts forth his first fictional feature with slick, convenient efficiency in what is a familiar, if formidable morality tale.

Arbitrage stars Richard Gere, Susan Sarandon, Brit Marling, Nate Parker, and Tim Roth, and starts out in Gere's hedge fund magnate Robert Miller's swank Manhattan apartment celebrating his 60th birthday with his successful, adoring family. But, this corporate financial titan (Jarecki uses some of his dad Henry's background in this area with good results) with a French art dealer mistress Julie (Laetitia Casta) on the side works up his wily arrogance through unctuousness and prevarications. Huge losses from a copper mine has Miller desperately trying to unload his financial empire (read: eponymous meaning with a big loan to meet an audit for a buyout) before the fraud catches up to him while making a fatal mistake that puts his professional and personal life in need of a major bailout.

What Jarecki (scenarist of The Informers) does well in creating what is like the intertwining of Gere's Unfaithful with the more recent well-received Margin Call is an interesting anti-hero that the actor of Chicago and (much earlier) Internal Affairs indulges in with natty, cruel mettle. How far will an anguished Miller go to follow through on his "responsibilities"? Many will liken him to an infamous Ponzi scheme financial stalwart, and Gere's calibrated caustic approach still might earn him more sympathy than Miller deserves.

Sarandon as Robert's charity foundation wife Ellen and Marling as CFO daughter Brooke probably are short-changed by the script, but the latter has a good Central Park scene with her father and the former gets to shine a bit when things have really spiraled downward. The desperately dogged NYPD cop has Tim Roth (having fun with the local accent) all over Miller and former con-artist (Parker) who is lured back into Miller's milieu while aspiring to have his own Applebee's. More support from estimable characters comes by way of Stuart Margolin as Miller's worldly lawyer that includes some amusing "hypothetical" discussion.

Always watchable and fairly fleet of foot, Arbitrage is complemented by the immediacy of Cliff Martinez's music as it unfolds with plenty of tense exchanges and understanding the value of negotiations losing subtlety (and some of its darker irony) down the stretch. But, what is breached through more recent critical temperament let the high-profile Gere (far better here than past mainstream dramas like Intersection) strut his raw thespian indulgence from the cold, tightening grip of  economic skulduggery (the best parts of the picture) to handsomely mess up the warmth and support of family.