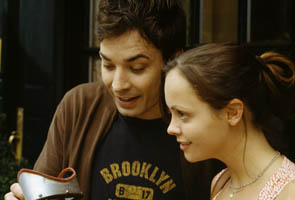 Woody Allen loves writing and making films set in New York City. His new romantic comedy Anything Else continues his affection for flawed characters and relationships with Jason Biggs and Christina Ricci occupying the lead parts. Even though this is a game try at expanding his diminishing fan base, there isn't much here that stands out from Allen's oeuvre that covers nearly four decades.

Here, Biggs is Jerry Falk in a role that Allen usually would have done himself as a comedy writer trying to make it in Manhattan. Allen has cast himself as former comedy writer, now edgy college professor David Dobel, a confidante of Jerry. The beguiling wanna-be-actress Amanda, a gorgeous Ricci, has Jerry at first sight. Jerry wonders why he's dating a woman who smokes frequently, takes pills, and has issues when he tries to be intimate with her. But, soon they are living together in a tight-knit apartment. Allen's cast includes Stockard Channing, prominent of late on "The West Wing," as Amanda's longing mother, Laura, who has moved in with them despite Jerry's objections.

Biggs is more ingratiating than most would expect which may indicate that a bright future lies ahead for the American Pie star, who handles himself admirably amid the anti-Semitism and psychosexual analysis played for laughs. Danny DeVito is the cheerful Harvey, Jerry's manager, who's with the young writer when he's not with his new best buddy. The pressures of Jerry's personal and professional life make him ponder Dobel's insistence of relocating to Tinsel Town where they could create a hit sitcom.

The narrative then puts more effort into Jerry and Amanda, as well as a separation which previously occurred during their relationship. The title doesn't imply a question mark at its end, but many of Biggs' followers won't be wondering why he works hard at capturing the rhythm and sounds of his Allen part. They'll be scratching their head as to why it takes so long for him to realize how immature Amanda is.