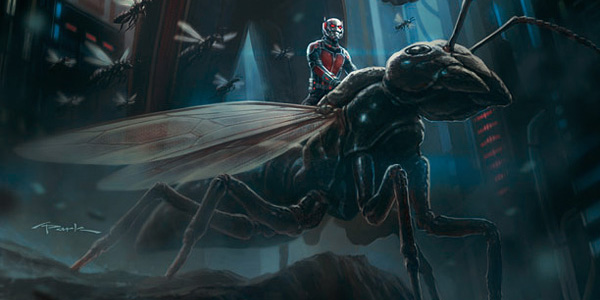 
Ant-Man, founding member of the Avengers, finally gets his due. Director Peyton Reed follows a logical and linear script that honors the true origins of the character. Ant-Man's first appearance was in Marvel Comics'  Tales To Astonish  #35 - Created in 1962 by Jack Kirby, Stan Lee and Larry Lieber.

Dr. Henry "Hank" Pym (Michael Douglas) has created a technology which allows Ant-Man (Paul Rudd) the ability to shrink in size while gaining enormous strength. Rudd also possesses the aptitude to communicate with an army of ants who play an integral role in helping to destroy Pym's nemesis and former protégé  Darren Cross (Corey Stoll).  Cross has duplicated Pym's formula creating weapons of mass destruction to be sold to the highest bidder.

One of the high points of Ant-Man is the film's ability to not take itself seriously. The choice of Paul Rudd as Scott Lang was brilliant. He has that sly smile and a sense of humor which added just the right amount of comedic flavor.  Too many superhero films are just one-dimensional special effects extravaganzas. Ant-Man breaks things up with a budding love story between Rudd and Hope Van Dyne (Evangeline Lilly), coupled with additional laughs from  Michael Peña.

Ant-Man is a must see. It  has plenty of non-stop action, without having to destroy a major city in the  process.  The kids are going to love this movie, and so will everyone else in the theater.