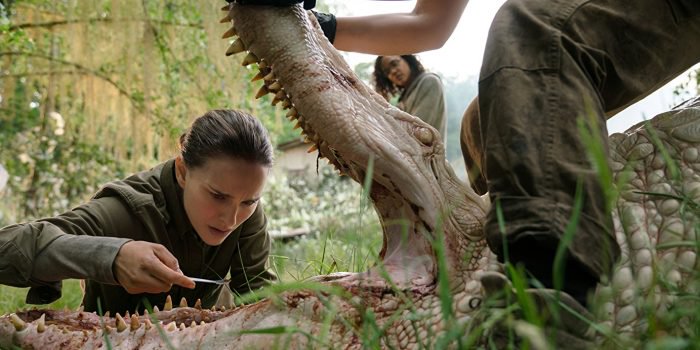 
Alex Garland works impressively with an emotional and aggressive Israel-born Natalie Portman (Jackie, Black Swan) in his second directorial outing after the sharp, darkly witty meditation on artificial intelligence and humanity, Ex Machina. Even with some hackneyed maneuvering (like the dialogue) in a crackerjack way with a genre chestnut.

The taut, thoughtful Annihilation (set in The Sunshine State but filmed in the United Kingdom) is drawn by scenarist Garland (The Beach) from the initial book of Jeff VanderMeer's praised Southern Reach trilogy. Some might find similarities to Ridley Scott's Alien and the recent deft Arrival, not to mention part of the oeuvre of James Cameron and recluse Stanley Kubrick.

Interpretative is apropos in a riveting ecological potboiler where five distaff professionals are seemingly put in dire straits. Portman's Lena, a biologist out of the Army, is on a mission into the "Shimmer", a swelling lush forest where contamination is pervasive.

Area X is isolated by the government, but the "Shimmer" has ominous potential on other occupied areas. Dr. Ventress (an intriguingly enigmatic Jennifer Jason Leigh of The Hateful Eight and The Jacket) is behind the important trek. Lena's military husband Kane (Oscar Isaac, also of Ex Machina, as well as Star Wars: The Last Jedi and A Most Violent Year, and sharing some sweet, intimate moments with Portman) was the only one to return from the previous exploration. A year later his appearance may not have changed but something has vanished from Kane and Lena needs a plausible resolution.

What Annihilation feeds off of is a cerebral, painful maleficence as fellow travelers plumb the apprehension of an almost forbidden zone with some (peculiar) creature presence. There's also anthropologist Cass (Tuva Novotny), physicist Josie (Tessa Thompson of Creed, Thor: Ragnarok), as well as Gina Rodriquez's paramedic Anya who has quite a crack-up.

A beacon could be the key to many clandestine disseminations where the mindful inquisitiveness and tension coalesce proficiently. Though in a film which still may elude the mainstream, perhaps in part because of the drifting from the source material (extending to the casting of Lena and Dr. Ventress) and the overall thorniness of what has been adapted to the screen.

The unsettling mental ramifications on the characters especially the alarm from the epitome of marital breakdown adds to the rather scintillating anxiety case study . A keen cinematic riddle proves Garland has enough mettle to resist and overcome the inherent impediments. The gorgeousness and horror are evoked in a striking production through lensing and an undulating electronic score to let the shaken onlooker absorb and in time comprehend what shimmers in the subconscious.