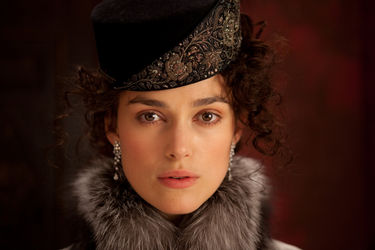 
Another splendidly produced collaboration between director Joe Wright and actress Keira Knightley has acclaimed scenarist Tom Stoppard ambitiously and unconventionally adapting a major Leo Tolstoy novel to often chilly, theatrical effect. It may not quite have the overall sweep and emotional pull of  Atonement or Pride & Prejudice, but it's at least visually hard not to be pulled into such thematic resonance.

The setting is 1870s Moscow where the aristocratic eponymous conflicted character, a formidable linchpin in Knightley (A Dangerous Method) meets a younger, handsome Count Vronsky (Aaron Taylor-Johnson of Nowhere Boy and Kick-Ass) while visiting her decadent brother Oblonsky (Matthew MacFadyen). Vronsky, as it happens, is there to propose to the sister of Oblonsky's dutiful wife (Kelly MacDonald), the voluptuous Princess Kitty (Alicia Vikander).

Oblonsky prods wealthy farmer pal Levin (Domhnall Gleeson) to court a rebuking Kitty who also is enamored with Vronsky. In St. Petersburg, Anna is married to unexciting government official Karenin (Jude Law), but as Vronsky is on her trail, her social status hangs in the balance as she gets more than a whiff of the gossip.

The execution of this exquisite period costume drama has a surreal feel as an allegorical Russian society from the interesting, enlivening on-stage approach with the characters (with the exception of  Levin at times) touched by the stagehands and the changing scenery. Especially for those well-versed to some of the novel's more memorable passages that offers undeniable, unexpected stimulating entertainment.

Clearly Stoppard's soundly sensible writing ignites something in Knightley that Wright harnesses into a rich passionately, distraught display that makes her obsession and interaction with a sharp Law, a more passive Taylor-Johnson, and welcomely jocose MacFayden quite revelatory. Amidst the stellar backup that includes Emily Watson (no one is really left out of the limelight) Gleeson and Vikander make for a delightful pairing in arguably the film's original offering that pays dividends (more so than earlier adaptations).

A quixotic Wright and Stoppard are keen on giving Tolstoy a well-deserved evocative cinematic representation resplendent throughout from exquisite design work as well as lush lensing from Seamus McGarvey and a rousing Russian-based score from Dario Marianelli. If the way around the premise of Anna Karenina may seem askew, a stirring romantic tale deliberately has a lively, openhearted way through its romantic entanglements.