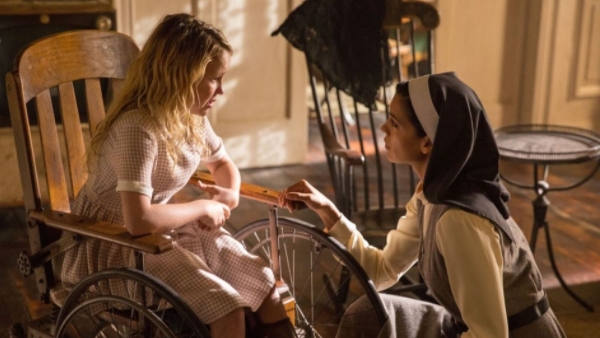 
A group of young orphan girls in the 1940's find themselves out of an institution and into a large impressive home that looks like the Walton house, but the sounds coming from the building are not soft good nights they are screams, loud scrapings, crashing furniture, and loud frightening musical sounds all designed to keep an audience on the edge of its seats.

It all begins twelve years before when Bee Mullins (Samara Lee) is killed by a car and her parents pledge to do anything to get her back. The deal agreed to is with the devil who brings back Bee in the Annabelle doll.  Now these new residents most of whom are little girls are prime territory for Bee's return as a little girl.  But Bee may not be herself anymore. I guess it's a little like Pinocchio.

Director, David F. Sandberg weaves some creative factors into the story, that is a rather standard scary film in an old dark house.  He uses the song: "You Are My Sunshine" playing on a 78 RPM recording to set the atmosphere of the period.  When the new girls arrive they are dress as they would be in the early fifties. The peer pressure rankings of the group are controlled by Nancy (Philippa Coulthard) who is the oldest girl, that places two of the younger girls alone sharing a room.  LuLu Wilson who plays Linda is a loyal friend to Janice (Talitha Bateman) who is the target of the devil in the doll.  Janice is an easy target in that she has a disabled leg which slows her down.  Anthony LaPaglia is the father who has a power lift chair for Janice to ride up and down the stairs, but even that helpful effort becomes a problem for Janice when the doll targets her for transformation.

Young Bateman and Wilson carry the film particularly Bateman who is the target kid who must express many emotions as well as curiosity when she is drawn by bumps and noise in the night.

This not like Ten Little Indians, all the characters are not lined up to be slaughtered one by one, there is only one target, Janice is the one to be converted.  In that process we see the use of crosses, blinding light, darkness, lights flashing on and off, a deep well, a dumb waiter, a rosary, a locked closet with religious postings on the door and as nun (Stephanie Sigman) who hears confessions, that's certainly new.

Annabelle Creation is designed to bring fears to it's audience and a lesson that one might receive what is prayed for.  The Mullins parents pray deeply but their prayers are hijacked by evil and they may end up with disfiguration and death while the evil lives for the next sequel.

Annabelle Creation is not great but it does do its job.