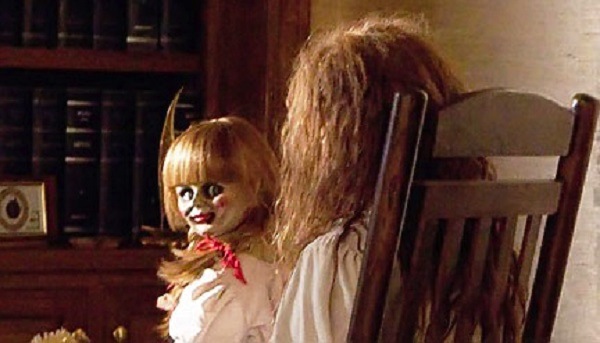 
"Before The Conjuring There Was" Annabelle (set in the mid-1960s) which is supposed to give its potential audience more stomach-in-knots scares like James Wan's 2013 emotionally involving predecessor with a solid cast that featured actresses like Vera Farmiga (The Judge) and Lili Taylor (I Shot Andy Warhol).

Alas, this "prequel" takes a hellish, hackneyed turn, inane and forecasted throughout for those awaiting highly vicious horror tropes at the beginning of the month where Halloween looms. What really isn't a "killer doll movie" doesn't even deserve to be mentioned alongside the campy, if creepy look at 'Chucky' in
Child's Play or much earlier the far better Magic with Anthony Hopkins as a ventriloquist. Even those flabbergasted over the machinations of the recent, probably forgotten Oculus would admit that it had a confidence and capable eye into some cruel intentions and inhibitions of its subject matter that maybe wasn't fully fleshed out into a truly, taut eerie whole.

Wan, who serves as producer, can't provide the kind of investment through story and character that scenarist Gary Dauberman and helmer John R. Leonetti (who's often been Wan's cinematographer) are able to deliver. Instead of feeling the similar chills of last year when Ed and Lorraine Warren came on to the scene circa 1971, it's disbelief when it comes to the need to have a vintage doll in a pure white wedding dress. One whose craftsmanship may harken some back to those Raggedy Ann dolls and its lurid use will seem quite risible to the religious-minded.

But, this antique is designed in a way that lets it become the linchpin for all things satanic as very pregnant Mia (Annabelle Wallis) is pleased to accept the macabre present from her inattentive husband John Form (Ward Horton). A cult attack on this middle-class family hints of abhorrent precursors like Charles Manson leading to an entreated incubus being their maleficent oppressor. So, the steely camera finds its mark that cue the sinister sound design when something pops up out of nowhere that suddenly corresponds with the enhanced volume level.

Leonetti and his technicians provide many of the bump-in-the-night jolts to try and smooth over a cast and script with little if any personality and a point-of-view to really latch onto. Wallis and Horton try their best (you would think) to be a typical 60s suburban couple but no empathy is with them or a bookstore owner Evelyn, a disastrous auxiliary role for Alfre Woodard who figures in the foolish final segment. Perhaps only Tony Amendola as Father Perez makes somewhat of an impression of an uninspired genre example in a couple of arguably alarming instances in an otherwise ineffectual, very wan (no pun
intended) Annabelle.