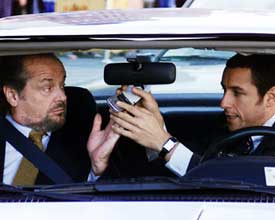 Adam Sandler plays Dave Buznik, a mild mannered New York businessman.  He's such a good, easy-going guy, that you'd never expect him to be court ordered to attend anger management sessions.  But, that's exactly what happens when he's falsely accused of assaulting a flight attendant on a crowded plane.

Dr. Buddy Rydell (Jack Nicholson) is Dave's court appointed therapist and he's more in need of some serious couch time than any of his patients.  He's obnoxious, over-bearing and rude, and to make matters worse, he moves into Dave's house for some up close and personal treatment.

Sandler as straight man to Nicholson's wacko is an unexpected and funny switch, and Nicholson seems to relish every minute of freedom that director Peter Segal (Nutty Professor II) gives him to be wild.

A large list of cameo appearances adds to the fun.  Woody Harrelson, Kevin Nealon, John McEnroe and Rudy Guiliani, to name a few, show up for some humorous moments.

There are enough zany goings on to keep you laughing and the two talented actors make Anger Management a silly, yet enjoyable experience.