Anchorman: The Legend of Ron Burgundy 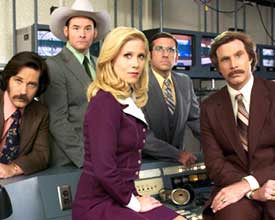 Will Ferrell and his former Saturday Night Live writing colleague Adam McKay have fun with the style of the 70's and male chauvinism in the television newsroom in Anchorman: The Legend of Ron Burgundy.

This satire is compiled bits played for laughs tackling the kind of subject matter seen in James L. Brooks’ lauded Broadcast News. As childish as the movie appears, somewhere between Ferrell’s recent family comedy Elf and the bawdy, outrageous Old School, the happenings in the San Diego television station, KVWM, almost seem like the Men’s Club in the original and current versions of The Stepford Wives. It was a dominion that would be encroached by woman journalists like Christina Applegate’s Veronica Corningstone that would challenge and energize the popular anchorman Burgundy (Ferrell) whose name matches his suit and has the right voice for his craft. One wonders of his journalistic abilities as he is apt to read anything on a Teleprompter.

Ron is the “alpha male” of a group of “sidekicks” who include the ladies’ man of a field reporter, Brian Fantana, played by Paul Rudd of The Shape of Things, as well as the faithful, uneducated Champ Kind (David Koechner), and the good-natured, but opaque weatherman Brick Talmand (Steve Carell of Bruce Almighty). Their allegiance to Ron once Veronica is recruited by new producer Ed Harken, another wry role for Fred Willard.

The way Veronica becomes a smash on one evening newscast while Ron has traffic problems thanks to a risible cameo from Jack Black puts the loveable womanizing, smoking and boozing journalist on the prowl to undermine the beautiful, yet wily Veronica, endowed with tenderness and ambition by Applegate. Ferrell and McKay find their element in those recess tangles that kids have and equates it with other San Diego television competitors.

The broad antics satirically clicks with feelings often felt by someone like Ted Baxter on “The Mary Tyler Moore Show.” The notion of a successful woman can bring conflict to a Ron Burgundy, whose charisma has kept him atop of his market. The relationship between Ron and Veronica is more amusing when it takes into account personal and professional intentions. Ferrell and Applegate are able to stir things up on and off the air as improvisation seems to hold it all together.

As in Ferrell’s recent supporting turn in Starsky & Hutch, this one underscores the kind of music, clothes and hairstyles on display when: "Love American Style” was on TV. The supporting actors figure as caricatures, as only they could. The pretty pastels on Veronica contrast with the monochromatic lighting that highlight the news desks. The result is the kind of disconnect from the brain, like Dodgeball, that has a flair for the attraction to nonsense, as evidenced by more silly, but laugh-inducing cameos from Ben Stiller, Luke Wilson, and Tim Robbins, not usually known for participating in comedies like this.