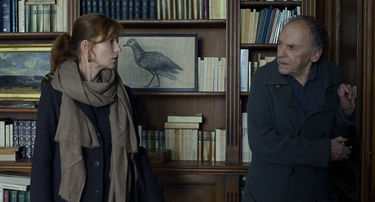 
An entrancing end-of-the-year melodrama is measured and mindful of what can happen to loving, married octogenarians providing an audience an insider's sobering look.

Amour stars Jean-Louis Trintignant and Emmanuelle Riva and unfolds with unsentimental honesty as directed with many extended shots to often haunting effect by Michael Haneke (Funny Games, The White Ribbon). Music does play a role or help catalyze what is really without a score in the tenderly revelatory lives of retired musical professionals, Georges (Trintignant) and Anne (Riva).

Not long after attending a performance by one of Anne's old students (Alexandre Tharaud), a mild stroke brings on a gradually debilitating condition for Anne by which Georges has to cope with the prospect of being her primary caregiver. She has her husband honor her request of not being hospitalized.

Their daughter, once student and musician abroad Eva (Isabelle Huppert, a favorite of Haneke) becomes more involved given the situation, even in the midst of their quality time. Anne also has the attentions of a visiting nurse (Carole Franck) and neighbors played by Ramon Agirre and Rita Blanco, the latter the concierge in the apartment building where Georges and Anne reside.

The pragmatic, elemental stylings of Haneke with arguably a little swaying on the narrative end serves the material well and never really becomes a chore even if the mood is really modulated at that outset. The course that "Amour" maneuvers through in its final sections might be questioned by some, yet the authenticity through so many vivid sights on screen makes it rather negligible at best by the affecting denouement with earlier classical compositions by Bach, Chopin and Ravel .

An anxiety becomes easily apparent as felt in the sharply rendered Sarah Polley effort Away From Her as a paralytic process is deeply palpable. Obviously, it helps that veteran Gallic stars in Trintignant and Riva are so beautifully consumed by and committed to their roles divergently in emotional and physical ways, respectively, to allow a poignant portal to their surprising existence.   Haneke finds a way in an extended way to incorporate pigeons and a stroke of horror (a nightmare or just at the kitchen table) to the proceedings that isn't really too manipulative to slide what is less gloomy and more attuned to the intimate drama of a cogently realistic human condition.