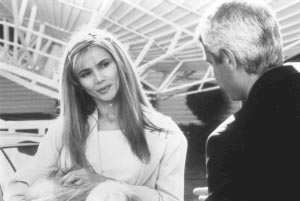 Starting to be distributed out gradually to US theaters after this year's Oscars Amores Perros (translated as "Love is a bitch") may come across to art house patrons as a cross between Pulp Fiction and Magnolia with dogs vital to the three intertwined stories connected by an automobile crash in Mexico City.  Mexico's foreign language film may have lost to the sumptuously striking epic martial arts tale from Taiwan, Ang Lee's Crouching Tiger, Hidden Dragon, but director Alejandro Gonzalez Inarritu has made his own visceral and artistic "Mexican Pulp Fiction".

The veteran TV director south of the border almost displays a Tarantino or Steven Soderberg touch in maneuvering three stories around a fateful incident in one of the world's most populated cities.  He may have more of Pulp Fiction on his mind as a divinely felt spitefulness reaches the human and canine inhabitants of a dangerous polluted metropolis with much traffic.  In each tale one of the "Ten Commandments" are violated and those with high hopes receive a biblical comeuppance.

In the first tale, brothers Octavio and Ramiro dwell in the slums as Gael Garcia Bernal, a credible compulsive young man who uses his brother's dog in an attempt to leave the urban plight with Ramiro's wife Susana (Vanessa Bauche).  But as he gets the pesos to get Susana away from her abusive husband, things get more violent with a rival dog fighter (Gustavo Sanchez Parra) and a desperate car chase doesn't payoff.

Inarritu uses the hand-held technique done so expertly by Soderberg in the masterful Traffic to make the chase sequence and dog fighting come alive with bruising authenticity.

The other two stories aren't quite as vibrant as the first one but still show the director working well with writer Guillermo Arriga Jordan to convey the plights of others affected by the car accident in the circular mode employed in the groundbreaking Pulp Fiction.

More deliberately told, a beauteous model Valeria (Goya Toledo) lives with a middle-aged magazine publisher who left his wife.  Valeria suffers a broken leg and desperately tries to recover the little dog who has fallen beneath her apartment's floorboards and is in the midst of big rats.  After the director nicely transposes what rots beneath the floor's sheen, a more lengthy, sentimental tale develops involving the nomadic El Chivo, called "The Goat," once an incarcerated terrorist for a mall bombing.

Somewhat reminiscent to Bruce Willis' boxer who doesn't take a fall in Pulp Fiction, Emilio Echevarria reveals a moving portrayal of a homeless man with a load of stray pooches, as the hit man El Chivo witnesses the wide-reaching accident and offers a surreal plan of justice involving his corrupt cop boss (Jose Sefani) and the businessman (Jorge Salinas) who he is contracted to kill.

Many will recognize the appearance of characters like Sefami's Leonardo in other tales as he witnesses the malevolent moonlighting of Ramiro, a grocery clerk by day and that will please Pulp Fiction supporters.  As the structure overlaps the use of hued imagery recalls In The Mood For Love, and like the acclaimed Tarantino movie, the pumped-up score greatly assists this languishing look, that will upset lovers of man's best friend when they suffer a fate worse than Puffy in There's Something About Mary.

Otherwise, how dogs and people fair in a cruel world has more emotional tensions in Amores Perros than expected and Inarritu keeps one in twined in the complicated situations even when his edgy, photogenic opus starts to lose its momentum and becomes melodramatic.