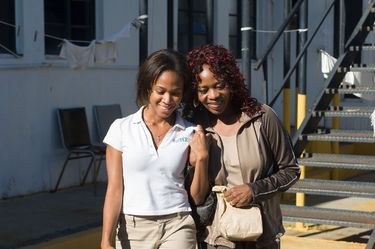 
A corrupt legal system is at the center of American Violet, inspired by true events.

This low-budget film, directed by a very firm hand by Tim Disney, will register best in urban markets, as racial injustice still occurs in places like the very rural Melody, Texas.

The uncomplicated yarn from Bill Haney centers on single mother of four, Dee Roberts (Nicole Beharie). Dee is taken in by authorities during a raid on her housing project, and charged with drug trafficking from the cooperation of one resident there. Others who very well may be guilty are corralled, and Dee refuses to plea-bargain to avoid a long sentence against the wishes of her upset mother Alma (Alfre Woodard) and court-appointed attorney.

A conventional, rather mainstream effort is boosted by a gifted cast as there is no visual flourishes, though an important testimonial plot twist. The ACLU comes to Dee's aid in the person of David Cohen (Tim Blake Nelson) as she faces pressure from hard-boiled dad (Xzibit) of two of her kids and an ardent District Attorney, Calvin Beckett (Michael O'Keefe, nicely understated in Frozen River). Will Patton also figures into Dee's defense strategies as former Assistant D.A. Sam Conroy out to taint Becket during a deposition.

American Violet obviously leans toward the left as periodically some old footage of the 2000 Presidential election, and may be comparable to the recent, more layered and a bit unsettling Changeling. Here, drug peddling is the chief crime that fills the country jail, more diligently prosecuted than the something like petty larceny with blacks from the poorest sections of town. In this often invigorating, if heavy-handed drama, Disney gets the most from Malcolm Barrett as gradually brash Byron Hill, who definitely gets viewer empathy in the latter sections. But, Beharie turns in something quite compelling as the brave Dee.