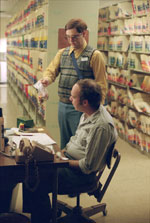 Shari Springer Berman and Robert Pulcini have joined together in writing and directing a unique biopic of comic book author Harvey Pekar that unfolds as a documentary with much sensitivity to one's work and self-discovery.

This year's Sundance Grand Jury Prize winner takes its name from Pekar's underground comic book that draws from his mundane struggles at a Cleveland VA hospital where he works by day as a file clerk.

The cartoon demons within Harvey are visited throughout with visual delight in addition to strange friends like Toby (Judah Friedlander) and wife Joyce (Hope Davis).  With critical success and a meeting with his mortality, Pekar shares a symbiotic dysfunctionality with illustrator friend Robert Crumb.  And Giamatti peels away diligently at a conflicted, rueful man whose stick figures morph into something of an American original, drawn into all of its cinematic splendor.