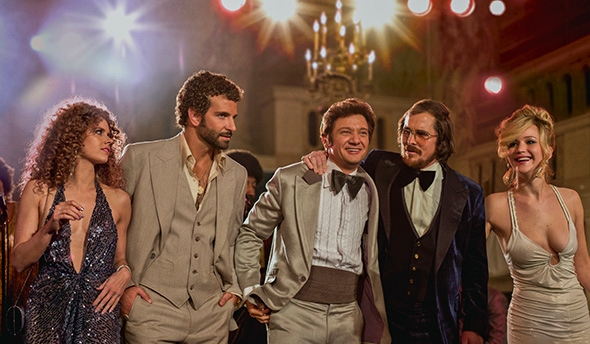 
This new flashy, fervent David O. Russell movie may not exude the same kind of pleasures in dealing with grifters, federal agents and bureaucrats as did his mental-illness romantic comedy Silver Linings Playbook. But in loosely working off of the FBI codename Abscam (from Abdul scam formed by the agency as its front business for its targeting of corrupt public officials in 1978 leading to over half a dozen convictions in 1981) operation he marvelously goes full circle with those on both sides of the law with alternating narration and impact surfaces. It comes down to how the personal crises escalate perhaps what is more important than an elaborate scheme enveloping them invigorated by Judy Becker's sparkling production designs.

American Hustle stars Christian Bale, Amy Adams, Bradley Cooper, Jennifer Lawrence and Jeremy Renner, and displays Russell's idiosyncratic maneuvering with finesse (and much latitude) into the underhanded machinations of the human condition. For some, the result might be a more comic, undisciplined version of last year's Oscar-winner Argo without a truly resonant payoff as the committed cast and filmmaking confers a zaniness to ensure the conflict and entrapment. Another distinguished, singular work touches on elements felt in extremely stimulating and polished productions like Boogie Nights and Good Fellas to name just two. Which has a distinguished quality about it when it comes to slicing into the American dream flipping from corruption and manipulation to trust and reinvention.

Bale is transformed from a gloomier demeanor of The Dark Knight Rises and Out of the Furnace through his Melvin Weinberg-like Irving Rosenfeld a paunchy, hunched over art forger, money launderer and loan shark who covers his phoniness with dry-cleaning enterprises. The very adaptable low-level con-artist (knowing how to get what he wants) is drawn to Adams' impassioned redheaded and very alluring Sydney Prosser joining his tricky dealings with a British accent as Lady Edith first drawn to one another at a lavish Long Island soiree.

Cooper's well-permed mama's boy agent Richie DiMaso isn't fooled by the pair with a flair for deception. In Russell's collaboration with Eric Singer (The International) on the ridiculously viable screenplay, he keeps Irving out of jail by having him implicate large fish for the bureau like Renner's Camden, NJ mayor Carmine Polito. Getting to Polito has a couple of million attached to a downpayment for igniting the gaming industry in Atlantic City needed by crime syndicate enforcer Victor Tellegio (a nice cameo for a not billed Robert DeNiro of the upcoming sports drama Grudge Match). It involves mobster Pete Musane (Jack Huston) and a fictitious Sheik (Michael Pena) as bait in the process to bribe several officials to gain operating licenses.

The way the writing and filmmaking conveys this freewheeling whirligig with vivid recreations to the period trappings, especially the costumes (check out Sydney's cleavage-friendly wardrobes) integrated nicely into the plot by designer Michael Wilkinson that many consider abhorrent now gives the cast ample opportunity to shine often in an over-the-top yet highly empathetic way.

Without actually establishing a chief conflict that hinges on Irving's vituperative wife Rosalyn (a needy but then combustible, more puffed-up Lawrence of The Hunger Games: Catching Fire) how the interactions play out especially between the genders has an oddly, gratifying crackerjack conviction about it. Pouts and tantrums and a lip-sync interlude help to enliven a rather shifty, sly woman with a son and a swept-up mop of long blonde hair.

Jay Cassidy's editing and fluid lensing by Linus Sandrgen help mold this crafty, colorfully confident melange of crooks and arms of the law as Rosalyn doesn't take too well to Irving's new partner while Richie is having problems with rigid higher-up Thorsen (Louis C.K. of Blue Jasmine) averse to funding the operation. As an oblivious Carmine (Renner's best part since The Hurt Locker) and Irving start a romance of sorts as the latter is concerned about the size of the operation, a besotted DiMaso goes to opprobrious lengths to be with Sydney who will have her confrontation with Rosalyn. The look between Sydney and Rosalyn (so poised but seemly wrong about everything) is so magnetic and extended it seems to block out relevant events around them.

A fictionalized fact-based tale obviously comes across as less serious in this kind of approach with a kind of wry, foreshadowing grin from the opening caption 'some of this actually happened.' As those in front and behind the camera extend the enjoyment they're having, American Hustle resounds with Danny Elfman's canny underscoring (with a great soundtrack which includes Elton John, The Bee Gees, and Harold Melvin and the Blue Notes) in an outrageous way around those who had rarely been convicted of accepting bribes.

Russell's conclusion to what can be considered his trilogy (which employs similar kind of racket and motif including actors and similarity in character for actors who've appeared in his comeback in The Fighter as well as the aforementioned Playbook) is more dynamic distractingly discomfiting delicious wit than sharp undercover expose.