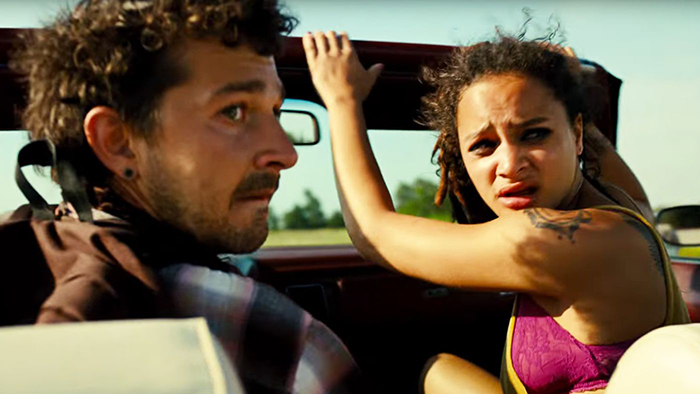 
British writer/director Andrea Arnold has affection for contemporary nomadic youth in revolt in Middle America in this rambling, impressionistic travelogue of a reckless subculture. She adapts her gregarious, protracted tale from a 2007 New York Times article, and the title comes from a Lady Antebellum tune heard later in the proceedings where electric songs echo throughout (there are sing-alongs to Ludacris and Rihanna).

American Honey moves from Oklahoma to states like Nebraska and Missouri with a penetrating eye thanks to the lensing of usual collaborator Robbie Ryan who focuses on the exploration of hope on the horizon through ignorance and ill-advised thinking. When not looking rather closely at insect life.

The key component is the casting of tyro Texan actress Sasha Lane (lined up during a Spring Break) as 18-year-old Star who exudes a raw vibrancy in abandoning her family to join a rag-tag crew hustling magazine subscription sales in a white van at a Walmart. She's has an eye for the charming, though testy Jake (Shia LaBeouf) who tells Star their mission is more than business as he rides in a convertible with manager Krystal (a flinty Riley Keough who happens to be the grand-daughter of Elvis Presley). One surfer dude is hardly shy when it comes to self-exposure and another has an obsession with all things Star Wars.

Arnold avoids the temptation of adhering to coming-of-age familiarity with a more hedonistic, visceral focus even as some conflict develops between bitchy Krystal and steely Star over the former's boy-toy. It's an unflinching, impassioned lesser-seen ride as refracted by the characters with a notable sequence involving a brash Star and three older, quite prosperous Stetson-donning Texans.

In American Honey the filmmaking lets a long summer unfold in loosened reiterative, somewhat intoxicating fashion as lurid elements of Harmony Korine's Spring Breakers and Larry Clark's Kids often prevail here. But, having a first-hand look at the supple cognizance Lane commits to the carnal, curious sides of Star can help the on-looker from getting too sore on the backside before and after Jake turns out to be an unsavory letdown.