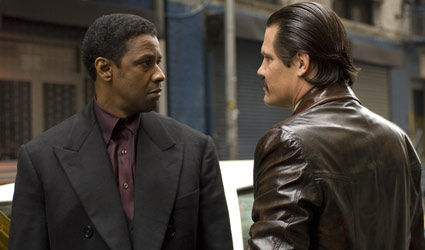 
Ridley Scott's American Gangster looks to be a major awards contender this season, carried by the performances of Denzel Washington and Russell Crowe.

These Oscar winners inhabit the parts of a celebrated black hoodlum and an insecure unconforming detective, respectively, who have a specific moral tenet. Most will liken the film to a Harlem slant on The Godfather or Scarface. Also, the changing attitudes about cops on the take may remind some of another involving Al Pacino film, Serpico.

The business of organized crime gradually settles into what seems like a biopic of Washington's sharp-mannered, urbane, and brutal Frank Lucas. At the outset, this driver for the real boss (Clarence Williams III) torches a rival drug dealer, then finishes him off with a couple of bullets. With the death of the boss, Frank's ascension of power makes for a syndicate that has him in a structure that causes a shift in the drug underworld. Frank is a man dedicated to family and pure product, in this case, called "blue magic".

The screenplay by Steven Zaillan from a noted article by Mark Jacobson looks into Lucas' ingenuity into his inner-city drug trade, and Washington gives the confident man panache in how he was able to more than compete with the other high-profiled Italian mobsters. In the early 1970's he would be making nearly $2 million a day in New York from his business when the currency was worth much more. Word-of-mouth would get it on the streets through the business assembly line, as Lucas operated as an independent contractor without the middlemen going to Bangkok from an Asian druglord who comes to admire his moxie. The smuggling was keyed by the coffins of deceased Vietnam soldiers.

The film demands viewer patience for protracted exposition about what drives the exploiting Lucas and outcast cop Richie Roberts (Crowe). Some of the most humorous moments come from the reaction to Roberts's return of a million dollars to his station from a drug bust. One learns of how Lucas and Roberts developed their own inner circles to help them accomplish their goals, the latter's being taking down one of the city's mainline corrupters, as well as a legitimate civic superstar.

Scott feels his way into this sometimes searing police drama with dynamic, well-established lenser Harris Savides using the backdrop of an unpopular Vietnam War and the cynicism that would easily believe the worst in local law enforcement. The contrast of a notorious gangster with the troubled New Jersey detective (Richie's in a battle for child visitation rights) has some charged visceral interludes, especially outside of a coffee shop, and later during a church service. The clash of these acting titans (most may think that Washington has the edge here in screen presence and acting chops) culminates satisfyingly into a face-off with some perspective into their true motivations with Lucas seen in a white T-shirt.

One believes that Crowe and Washington truly have inhabited the parts, and they, along with solid support by the likes of Armand Assante, Josh Brolin (a menacing special investigations detective), and, yes, a flamboyant Cuba Gooding, Jr. as the flamboyant Nicky Barnes, make it watchable. There is also decent support from women like a recent Miss Puerto Rico and the splendid Ruby Dee. Yet, the way Scott and Zaillan emphasize these two men on opposite sides of the law could have been much more of a poignant shootout, so to speak, and is a drama that lacks the swiftness and originality of last year's Best Picture winner, The Departed.