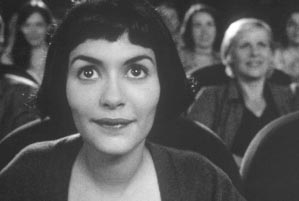 Twenty three year old Audrey Tautou's Amelie is a delight to watch.  In fact she is charming, captivating, and endearing both to us and her acquaintances in the Montmartre section of Paris.

Watching her makes us think of Bridget Jones and last year's Chocolat, films which delve into the emotions and every day lives of conventional people in a local community.  The glitz in this production falls to the streets around Sacre Coeur where Amelie carries out her odyssey to transform the lives of certain folks she knows.

It all begins when she finds a box of childhood treasures hidden behind the baseboard in her apartment.  Returning it to its original owner she watches his reaction from a distance and determines she can transform people through simple actions.  Each plan is specific to her perceived needs of the individuals involved; generally she helps by encouraging but in one case she punishes an obnoxious fruit vender.

With Tautou looking like a young Audrey Hepburn and her enthusiasm spilling all over we spend most of the film smiling at her activities and the joy in her eyes as she succeeds.  She's a matchmaker, purveyor of hope, a restorer of dreams and could be a patron saint.  It all works for others but her transformation for herself is her most difficult task.

Not as mystical as Chocolat, Amelie, none the less, has a quality based on love which kept her from school as a child (her heart would beat too fast when her father measured her pulse), because she craved love so much.  That kept her from school and lead to what is a calm, passive, uneventful life, but that doesn't keep her from motivating her father to travel as he has always dreamed.

Director Jean-Pierre Jeunet displays his loving affection for the streets of Paris and infuses the soundtrack with classics like With a Song in My Heart by Rodgers and Hart, when Amelie is at work in a small restaurant where she plays the match maker between a customer and the woman who sells tobacco products.

Amelie is just what the doctor ordered, a fresh delightful face in a warm fulfilling story about real people in a beautiful classic city.  I was enthralled throughout.