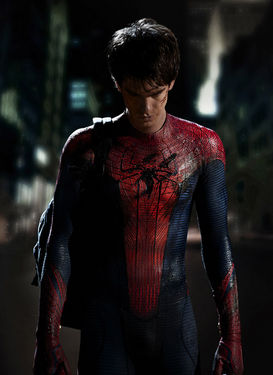 
Marc Webb's new superhero actioner based on the Marvel Comics admirably distinguishes itself from the Sam Raimi hit franchise that reinvigorated the franchise a decade ago (with stars Tobey Maguire and Kirsten Dunst) whether it's really another origin story disguised as a reboot (think Batman Begins).

The Amazing Spider-Man (enjoyed most prominently on large-formatted or IMAX screens) still isn't the kind of experience (the 3D format is applied only in some appetizing establishing shots with glistening Manhattan skyscrapers and skylines) that may truly captivate the viewer, ala The Avengers, The Dark Knight or Raimi's Spider-Man 2.  Still, with a new lead in Andrew Garfield (The Social Network) who'll be the red-and-blue suited crime fighter when not photographer Peter Parker (not working for The Daily Bugle), the atmosphere and visuals (including some vivid set decoration) do some justice to its more heartfelt issues.

The tale devised by James Vanderbilt, Steve Kloves, and Alvin Sargent (a scribe for Raimi) has a younger Peter suddenly having to live with Uncle Ben (Martin Sheen) and Aunt May (Sally Field) as his parents, including enigmatic scientist father (Campbell Scott) soon totally drop out his life. Peter obviously has issues he'll address, but as seen through Garfield in the science-savvy high-school kid bitten by an experimentally altered spider there's more of an scornful edge even before the morphing with extraordinary powers.

Where Webb especially excels (having made the appealing shifting rom-com (500) Days of Summer) is having the talented, intense Garfield opposite Emma Stone (The Help, Easy A) as the cutely preppy science classmate Gwen Stacy (played by Bryce Dallas Howard in Raimi's trilogy). The perceptive, maturing actress easily is a likable presence and has a nice coquettish snap with Garfield. The way Peter goes about courting her works for from the nuance and vulnerability to a role privy for a good while to something they only know.

Peter's vigilante side, as well as more sonorous altercations will come more into play as he learns of his father's old partner, Dr. Curt Connors (Rhys Ifans), using himself for the prototype of some innovative, if unsubstantiated genetic research with destructive results doled upon many credulous Manhattan denizens in lime, lizardy fashion.

Even within the tenuous, perilous disposition on the material, the actors stay within the schematic laid out by the filmmakers to promise an unsettling deliberation on a new franchise (as a sequel is promised halfway through the closing credits). To the dismay of some fans, the action may be more obligatory than more of a driving force. There are viable verisimilitudes that express emotions through more of a rebellious, misinterpreted interloper this time around. Besides the inviting interplay between Garfield and Stone, a solid Sheen, whose Uncle Ben doesn't utter the famous phrase used later by the more insecure everyman endowed by Maguire, some decent support comes by way of Denis Leary as Gwen's cop father; Leary is able to sink some of his comedic chops into a part like J.K. Simmons did as the irascible newspaper editor.

If this 'Spider-Man' feels unnecessary or is hardly amazing there is some sensitivity and substance to what Stan Lee (who has one of his humorous Marvel cameos to date) and his collaborators put on the page, as well as new comic artists. So, Webb with his craftspeople subtly shades the detailed set pieces to try to let it stagger with unsettling feats on its own level.