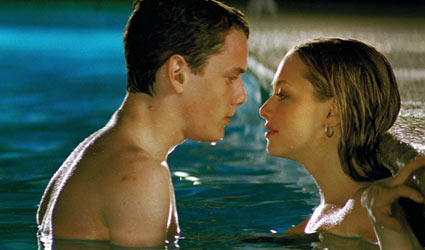 
A frenetic hybrid of Blow and Bully is Nick Cassavetes' Alpha Dog, a sordid observation of youth alienation.

It's Cassavetes' take on Jesse James Hollywood, here called Johnny Truelove, arrested in 2005 for the 2000 kidnapping of teenage Nicholas Markowitz. Apparently the writer-director, son of the late John Cassavetes and actress Gena Rowlands, was prevvy to these unnerving happenings (of which there were some 38 witnesses).

Hirsch (Imaginary Heroes, The Girl Next Door) is the Jesse James character now called Johnny Truelove and Anton Yelchin (House of D) is the Markowitz character, in this case called Zack Mazursky.

Cassavetes, known for films like John Q and The Notebook, makes things a bit irritating for the viewer as Zack's older hot-headed almost head-shaven brother Jake (Foster) has run up a drug tab to Johnny that he's unable to pay. Timberlake is a tatooed, tough pothead under Johnny who has to watch Zack. And hedonism will eventually lead to dire consequences. The connection between Johnny, and, especially, Frankie and Zack give the film some emotional punch, especially near the end.

But, Alpha Dog is most too feral for its own good as Cassavetes has style to burn cinematically, like split-screens. Bruce Willis and Sharon Stone, much bigger (at the harrowing climax) than Catherine Trammell are neglectful, and in her case, a hyper parent. And, this leaves much less of an impression that Timberlake who rises dramatically from the acting backstreets of a barren side of southern California.