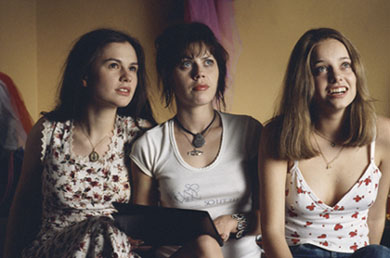 His assignment is to do a piece for Rolling Stone on the rock band Still Water, the opening band for Black Sabbath.

The year is 1973 and the rock scene is a bit overwhelming for this naive boy.  He gets backstage, along with some female groupies headed by a pretty sixteen year old blond, Penny Lane (Kate Hudson - Goldie Hawn's daughter), who's sleeping with the lead guitarist Russell Hammond (Billy Crudup).

William expects to take off for four days to write a terrific article and return to school, never expecting the trip to change his outlook on life.  However, what begins as a lark, turns into a real learning experience for the youngster as he's thrust into the world of drugs, transvestites and self destructive rockers.

Writer/director Cameron Crowe (Jerry McGuire) draws on his own experiences as a youth and uses humor and a sensational cast to bring the 1970's to life.  Frances McDormand as the overbearing mom provides most of the funny moments as she checks up on her son.  Young Fugit is just adorable as young William, who's given a crash course in growing up.

Also impressive are Hudson as the girl who is used and tossed aside and Crudup as the charismatic rocker.

Crowe has a wonderful story to tell, his characters are flawed, yet likeable.  The 1970's have never been as entertaining, endearing and fun.