All the Boys Love Mandy Lane 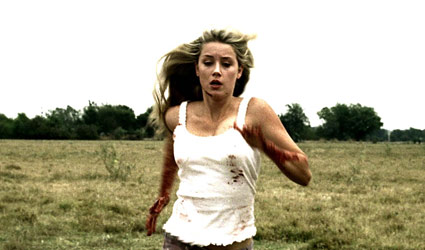 The comely title character in All the Boys Love Mandy Lane played by Amber Heard (The Informers and Pineapple Express) is quite desired by many. So much so that one boy (Adam Powell) loses his life trying to really gain her favor. Emmet (Michael Welch) is the dorky friend who becomes distanced as she becomes more well-received in her Texas high school.

The script formulated by Jacob Forman has Mandy going to a remote ranch for a big bash to celebrate the end of the semester. She becomes more of a focal point for the guy who serves as the host and his friends over the other girls who have eyes for a handsome ranch hand (Anson Mount).

For a while the milieu of the teens feels authentic, even if one senses something dire encroaching on their plains of pleasure. As the menace becomes more palpable, the lurid tampers with the reality of a thriller where most of the characters act more sensibly than those found in a teen horror show.

Levine has a flair with a cast, especially Heard (Alpha Dog) and Mount, in realizing the naivety and irateness that reflect teen attitudes. Much of the interaction has a freshness to it, until the grisly and the ragged rushes on to the screen. It leads to unwelcome payoff that undermines the atmospheric foreboding that the lensing provides from lighting and movement to project something stylish and taut. At least the target audience for this unspectacular, rather rash drama may connect with the bristling cover tunes than the issues at its core.