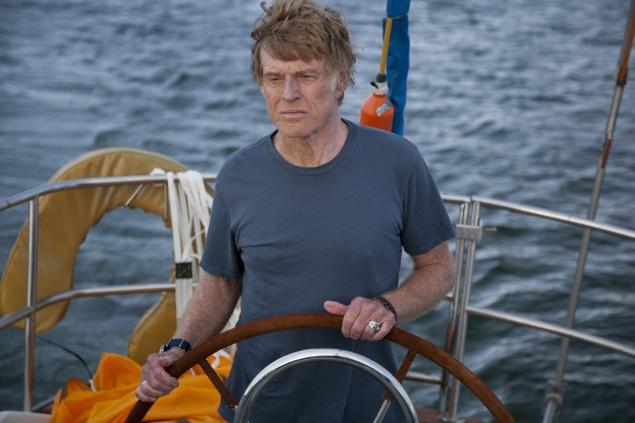 
J.C. Chandor switches from Wall Street to mounting, terrible coincidences on the high, very stormy seas over an eight-day period.

After the riveting Margin Call there is way less verbal chatter about 2,000 miles from the Sumatra Straits in the Indian Ocean where a 39 foot yacht (named Virginia Dean) is beset by a cargo container with Chinese shoes.

A solitary navigator, known as 'Our Man,' done with a bravura physical and mental prowess by Robert Redford (who's shined in front of the camera in a variety of genres, but never in a life-and-death situation quite like this, maybe not since 1972s Jeremiah Johnson).

This type of survivalist tale requiring resiliency and ingenuity may connect with those very fond of recent fare like the more Ang Lee's The Life of Pi or Alfonso Cuaron's Gravity without the beauty or enormity of it all. The intimate, tight lensing and stunt work (with Redford, even in his mid-70s doing much of it) reveals a gritty authenticity to limn out the emotional strain. Some may think this kind of succession is Mother Nature perhaps being too vicious to its weaker inhabitants.

A minimalism is established here less the kind of exposition needing for harrowing tales (more for the mainstream like Wolfgang Peterson's The Perfect Storm) that may be allegorical in nature trying to espouse the vulnerability of one's spirit. After reparations have been made, the electronics for the Virginia Dean are rendered obsolete and another pummeling at sea takes the logician of an intrepid sailor aboard a lifeboat (aka Captain Phillips) for more intense, perilous circumstances.

The cinematic immersion that a clever Chandor delivers on a teeming sea quietly rumbles with detail, as well as disorientation and hopelessness that could relate to Transcendentalists and an insurmountable plight felt in The Book of Job. It allows a thoughtful, dogged Redford to sensitively stand out without grandiosity amid bigger ships and fish prowling the seas. As its title indicates from what may be its longest spoken passage All Is Lost doesn't aspire to a kind of spiritual or thematic uplift while formidably through Our Man embracing the heartless wonder of it all.