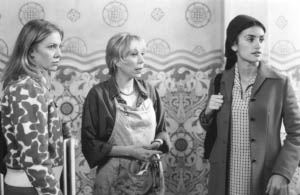 All About My Mother

In All About My Mother, Pedro Almodovar adds to his repertoire as a flamboyant director who can spice up melodrama with unusually striking players.  He complements his assets with drama that poignantly contrasts with his breakthrough hit in the States, Women On The Verge Of A Nervous Breakdown.  It's a film that shows Almodovar's body of work that has brought him to a point where he reflects in homage to all current and future mothers.  His thoughtful way of staging emotion under his usual manner of shooting in primary colors enables the director to realize more of his talents.

Many of his fans may be surprised to see less of Pedro's wild side, as in Tie Me Up! Tie Me Down! or Live Flesh, but there is something here that goes beyond the senses as he reinvents himself.

The ironically felt story concerns Manuela, a onetime amateur actress who's now a tactful teacher for stricken families of dying patients.  Played with passion by Cecilla Roth, as a car runs down her son (Eloy Azorin) during his pursuit of a stage diva, Huma (Marisa Parades) seen in another more solemn Almodovar effort, Flower Of My Secret.  Before her tragic loss on her son's 17th birthday, she tries earnestly to follow through on his desire to know more about his father.

Not quite mellowed out yet, the director introduces some eccentric characters and Roth's curiosity involves the help of a pensive Penelope Cruz, a courtesan (Antonia San Juan) once a drag queen, and a nun who happens to be with child.

There's a correlation to American cinema, as a scene from All About Eve is shown and Tennessee Williams' A Streetcar Named Desire as her son's favorite performer stars in the play.  Manuela had been in a smaller adaptation when she got involved with the boy's dad before he had a sexual identity crisis.

Almodovar serves up a Spanish dish that shows his unwavering respect and understanding for women.  His creative powers carve out a picture that won't be the hit that Women was, but he subtly thanks all mothers, through the nurturing Roth, who learns much on the way to Barcelona.