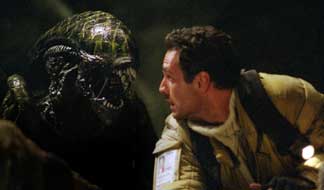 Alien vs. Predator is frustrating. The team gathered by billionaire industrialist Charles Bishop Weyland (Lance Henriksen - the android ‘Bishop’ in Aliens) doesn’t have a chance against the Aliens, Predators or the non existent script.

Sanaa Lathan, last seen in Brown Sugar, is first seen climbing the face of an ice bound mountain she is the natural leader of the group and the one who has an evolving relationship with the violent creatures who are battling 2000 feet beneath the Antarctic continent. Raoul Bova who co-starred opposite Diane Lane in Under The Tuscan Sun, is an archaeologist who can read the hieroglyphics on all three pyramid styles established at least a century ago. He does it as each chamber changes its configuration every ten minutes as the entire Dark City did each midnight.

David Johnson’s photography is stunning at times but when the battles are engaged he uses irritating shots which are so close to the action we can’t determine what is happening. But to his credit very often his lensing sets an atmosphere beauty and danger. And John Bruno’s visual effects are the real star of this production, they overshadow everything else. Along with Alec Gillis and Tom Woodruff, Jr’s special effect art we see a beautiful tapestry that brings us to a new unique special world. The use of long sound waves with low frequency vibrates the air and adds to the FX commitment in the film.

But what about the story, Aliens have been frozen in under the south pole to be thawed out and create a right of passage for young Predators to practice on. That’s it, I wouldn’t want to have to justify the expenditure to the leadership of Predators back at their home planet.

With the beautiful science fiction setting we expect more substance than is offered, it takes more than slime and a little blood to create fright and quality needs decent writers. The original Alien was perhaps the best terror science fiction film ever made, it revolved around the characters not hardware.

Having a Predator bang on his chest and yelling like “King Kong” after killing an Alien doesn’t make a classic. Alien vs. Predator is a wasted effort.