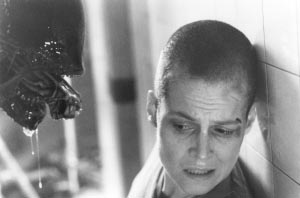 Alien 3 is a dark, morbid film.  It is exciting and filled with danger for Ripley (Sigourney Weaver), and it does present a twist and dilemma for the strong female leader.  It is also confusing and has scenes which are so dark they have little meaning.  The other cast members have little character development, they simply become victims for the "Alien" monster.

On her trip back to Earth, Ripley is awakened from her deep-space sleep when her vehicle crashes on Fiorina "Fury" 161, a prison colony.  Ripley's fellow passengers, including little Newt, are killed.  Ripley suspects Aliens are responsible for the crash, but of course no one believes her until torn, bloody bodies begin to appear in the catacombs of the prison.  With no modern weapons, the prisoners and Ripley plot to destroy the deadly predator.

The action takes place in dark cells and passageways.  No future look here: it appears to be a combination of medieval and early industrial prison planet.  Ripley's head is shaved to avoid lice.  The action is violent attacks by the Alien as the humans run to avoid the danger and attempt to trap the huge, insect-like creature.

In the end, the battle between the Aliens and Ripley is resolved in fire and violence.  The journey, however, lacks the excitement and tension which made the first two films great science-fiction terror.