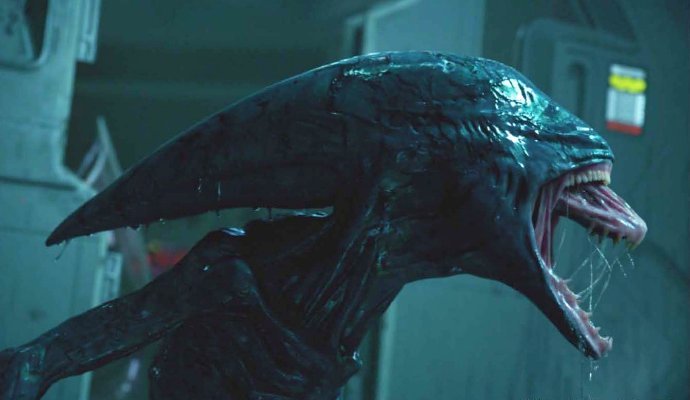 
Ridley Scott's latest beautifully crafted prequel in the Alien franchise won't disappoint those looking for what made it a masterly fright fest in its first two installments beginning nearly a couple of scores (of years) ago when "in space no one can hear you scream." Its detractors may look at it as more of a remake than the overarching reach of the series' mythology.

Alien: Covenant stars Michael Fassbender, Katherine Waterston, and Billy Crudup, and is set about a decade after the events of 2012's Prometheus which frustrated fans when it came to characters and a philosophical approach (read: creator/creation).

Probably acquiescing a little to studio bigwigs the director of The Martian proves he can endure at almost 80 years of age in sci-fi horror with contemplative underpinnings before the fiendish 'xenomorphs' (banana-shaped heads, acid-dripping teeth from H.R. Giger's dynamic designs) take center stage.

The result is a pretty solid sci-fi adventure hybrid of the Noomi Rapace/Fassbender starrer and the Scott and James Cameron initial forays which featured an iconic no-nonsense heroine in Sigourney Weaver's Ellen Ripley.

The journey to the original continues with a detour on a mission (with thousands of embryos and couples to propagate homo sapiens on the eponymous space vessel) due to a space (solar flare) storm that leads to an uncharted paradise (after receiving a rogue transmission with John Denver on the airwaves). One that is too good to be true (with its atmosphere and landforms) according to Waterston's Daniels. She counters the new commander, Capt. Oram (a somewhat shaded Crudup), who is a man of "faith" and doesn't have the qualities as a professional and a man than you would think an alpha-male in his position should have. Which might irk a certain sect of the viewing audience.

Nonetheless, the excitement picks up in fits and starts as pathogens are released and Fassbender's eerie, if  idiosyncratically mesmerizing Brit David from Prometheus is encountered on the celestial body. Especially after meeting his more 'Data'-like upgraded Yank counterpart Walter when a flute session adds a certain charge to the proceedings.

Crew members will fall as the script co-written by John Logan (Skyfall, Hugo) hasn't forgotten the backstory Scott promoted in Prometheus touching on the deeper questions but maybe not answering them with references (some biblical) that exudes an odd, dark ambiguity.

But, there are reveals (that may not surprise series die-hards) with the final third offering more viscerally-infused moments and action that are familiar to those other than the casual on-looker. Waterston (Inherent Vice, Fantastic Beasts) aptly fills the bill with an engaging mix of vulnerability and Ripley-like strength and Danny McBride finds a kind of beefy solace in a more serious turn as pilot Tennessee.

And, the characters by Fassbender in a rangy turn of canny, chilling duality stand out in a way that accentuate the prowess of craft contributors in the lensing and music department which complement the Jerry Goldsmith score with occasional noticeable pulsating edge. This Alien thrills and pounds its way luridly forward with a covenant to past, more shocking, if subtly rendered glories.