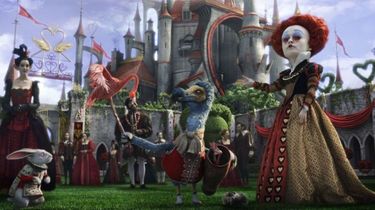 Filmed in 3-D, Burton's version has Alice, a spunky 19-year-old, return down the rabbit hole for another visit. She had been to Wonderland as a child, and continued to dream about the strange place ever since, and on the day that she is to be proposed to, she is drawn back for a purpose.

The magical land is filled with beauty and ugliness, and much to Alice's dismay, she meets up with both. There are flowers, lush trees and butterflies, and also to match the Red Queen's enormous head, she surrounds herself with characters who also have large body parts. There are women with big ears, and some with crooked, big noses and men with large bellys - she seems to think that if everyone around her is as grotesque as she, no one will notice her own deformity.

There are also some cute characters wandering around. The rabbit, both Tweedledee and Tweedledum (twin roly-poly boys) and the White Queen are all benign residents. However, the Red Queen, who continually yells "off with their heads" and Jubberwock the flying dragon, whom Alice is destined to fight, are quite scary and would probably frighten younger kids.

The Cheshire Cat (Stephen Fry) is a lot of fun. He sort of floats in the air, never really landing on anything and before you know it, he's gone in a puff of smoke. Depp's Hatter is a strange dude. He has a gap-toothed smile, electric red hair and wild eyes. He's something between a painted doll and a loon.

After 20 years of collaboration - Edward Sissorhands, Charlie and the Chocolate Factory and Sleepy Hollow to name a few - Depp and Burton continue to surprise and entertain.