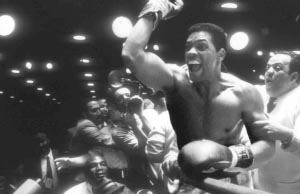 Will Smith and director Michael Mann collaborate with power and panache to try to personalize the man who was cocky, funny, principled, and know worldwide as "The Greatest" in the well placed biopic Ali.

Mann has a harder time making his new film cohesive and compelling in part because Muhammad Ali's dancing in his private life mirrored his mannerisms in the ring.

The screenplay co-written by Mann and colleague Eric Roth features many cogent and well-staged sequences.  Yet the life during Ali's prime as a boxer from 1964-1974 as a whole doesn't quite pack a knockout punch considering the commitment from Smith.

The era of racial unrest is present when Ali opens and it shows Mann's artistry behind the camera.  Tracking and close-ups of Ali, then known as Cassius Clay, running and hitting the punching bag in preparation for a heavyweight title bout with Sonny Liston, are cut deftly from a Sam Cooke show where the ladies are swooning.  The visually acute helmer inserts a flashback of Clay as a youngster shocked by what he sees in a newspaper as he goes to the back of a Southern bus with his father.

Many who become associated with the boxer are glimpsed at here, including famous trainer Angelo Dundee (Ron Silver), Malcolm X (Mario Van Peebles), and Howard Bingham (Jeffrey Wright).  Ali has potent dramatic issues that it doesn't always deliver on, but it puts some juice into how a name made something much more than an athlete.

It may have been a difficult chore to get inside Ali's life away from boxing, but insight into his first two marriages are transitory with real-life wife Jada Pinkett Smith as the sensual Sonji and Nona Gaye (daughter of Marvin) more revealing as second wife Belinda.  The importance of Ali's conversion to Islam and the effect of Malcolm X on his life helps to inject Ali with fervent emotion.  Yet, there isn't as much depth as there is in the individual moments.

The muted, sometimes sweeping story works well without much artificial lighting and designed to meet the demands of a talkative or reflective champion.  Mann doesn't closely examine Ali's political and religious views, getting the most out of resisting the U.S. Army and how it led to a surprise Supreme Court decision.

The life of Muhammad Ali was impacted by ABC's Howard Cosell in the ring, at press conferences and on the "Wide World of Sports" program.  Jon Voight is unrecognizable, but on the mark with makeup and a toupee.

At the end of Ali, boxing takes precedence over personal matters with marital problems unresolved.  Ali's headstrong decisions made things difficult, but the culminating "Rumble in The Jungle" in a packed, massive stage for the world in Zaire shows how Ali became vilified for his arrogant pride.

Still, if Mann too infrequently heats up the material, the camera work consistently penetrates or eavesdrops whether in or out of the ring.  The blows dished out and received have never sounded more convincing.  And in this overproduced biopic the music from Lisa Gerrard and Pieter Bourke rhythmically enlivens the vintage years of a famous influential sports figure.