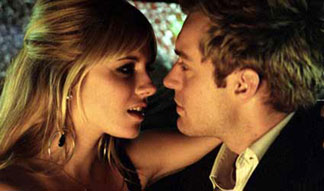 The world has changed a lot since Lewis Gilbert’s original adaptation by Bill Naughton from his own play that co-starred Shelley Winters. It did have a potency to it and Caine brought much cynicism and attitude to the brash cockney fellow who had his way with women.

Shyer puts Law’s Alfie Elkins, a swinging bachelor chauffeur, into a more discriminating hedonistic pattern in a society that has faced up to AIDS and other political, religious and cultural trends. With a charming confidante for the cameras friendly Law and a very attractive cast, much of the film’s appeal will share a similar demographic to those who liked HBO’s “Sex In The City” and Nancy Meyers’ What Women Want.

Law is capable of getting one involved in the routines of Alfie from his cozy bachelor digs, his designer suits that are a touch retro same as his limousine company. He works there with his sole male friend Marlon (Omar Epps of Against The Ropes). Marlon’s relationship with bombshell girlfriend Lonette (Nina Long of Baadasssss!) isn’t what it once was and his friends briefly begins to develop a conscience after a seductive poolroom scene.

Besides a libidinous Long, newcomer British actress Sienna Miller shines as Nikki, Alfie’s “Christmas miracle,” and Jane Krakowski goes along for the ride as a frustrated housewife, Dorie. And there’s a nice contrast in the parts played by Marisa Tomei (Anger Management) and Susan Sarandon, currently in Shall We Dance. Tomei’s Julie is the down home single mon “semi-permanent-quasi-sort-of-girlfriend” and Sarandon’s Liz is the chicly upscale Chanel businesswoman who’s the mirror image of Alfie.

From a script by Shyer and Elaine Pope, the film doesn’t breathe new life into the character of Alfie as some of his ruminations on his Lothario ways begin to get tedious after a while. But there is plenty to like from the production if the initial allure begins to fade. The lensing, similar to Law, brightens up Manhattan at night and the Upper East Side, where Liz lives it has a sensual, elegant decor that is complemented by the breezy, vibrant score from John Powell and music by Mick Jagger and Dave Stewart.