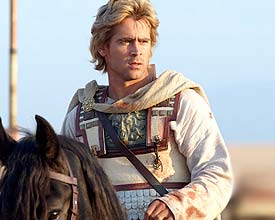 Oliver Stone’s long-in-the-making Alexander is very uneven, yet quite watch-able from its well-appointed costumes and sets as it comes in just under three hours. It is a striking, but often wearying spectacle as the music by Vangelis (Chariots of Fire) never lets up.

Irish stalwart actor Colin Farrell, very blonde in the demanding title role, suffered injuries during Stone’s massive production which never really puts the man behind the glorious accomplishments into perspective. There’s a brawny sweeping thrust that has Stone in full visual mode as Alexander will expand an empire unprecedented in the 4th Century B.C. before his death at 32.

The screenplay collaborated on by Stone flows un-chronologically starting with his death in 323 B.C. as a ring slips from his hand. That ring has significance for Stone and Alexander from his comrade-in-arms, Hephiastion, played by Jared Lento (Requiem For A Dream). Alexander was known to have male lovers and Hephiastion was an important one. Farrell is made to look less masculine through clothing choices and makeup with Hephiastion very close to the warrior he’s attracted to.

But, there are women in Alexander’s life who complicate things for him, Angelina Jolie is his very alluring mother Olympias who has a thing for snakes. She has it in for her son’s one-eyed burly father, King Philip, energetically rendered by Val Kilmer.

There are implications that would have Freud chewing on as the diabolically manipulative Olympias wants Alexander to know that Zeus is his real father. A Persian princess named Roxane, embodied with much beauty and sensuality by Rosario Dawson, becomes oddly masochistically wed to the King of Macedonia. And our hero will become more conflicted in his struggle for control as he must deal his troubled past when his drunken father attempts to force himself on his mother.

Stone has Farrell almost like a rock star going on a worldwide tour in setting his place in history. Some may see it as a reflection of the film-maker who perhaps shows more caution here than expected. Like the other sword-and-sandal epic Troy from earlier this year, some of the carnage and battles are presented with heft, especially in elephant fights and at Gaugamela as some strong locations come from Thailand and Egypt. However, as in the Brad Pitt epic, it’s often difficult to follow the combatants in some spectacularly mounted scenes.

The achilles heel of Stone’s excessive Shakespearian-esque labor of love has to do with not understanding someone not modeled to be a natural born ruler. Besides being filled with much dialogue from a variety of accents probably to fit Farrell’s Irish brogue the way the story is narrated by Alexander’s confidante General Ptolemy (Anthony Hopkins in a long white tunic) is more irksome than incisive or informative.

Christopher Plummer (National Treasure) offers some wisdom on what it will take to achieve an empire. There are flourishes which compare to those seen in films like The Doors and Nixon which also starred, respectively, Kilmer and Hopkins. Yet the women in Jolie and Dawson fare better than their many male counterparts in what feels more like cinematic foreplay with heavy leanings toward Mommie Dearest. It’s clear that Stone has a lot to say about the times when the Hanging Gardens of Babylon was a wonder of the ancient world, but here that world is filled with languishing lurid melodrama.