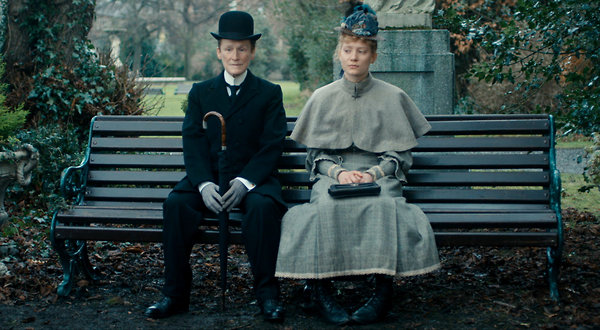 
This new drama from the director of Things You Can Tell By Looking At Her and Mother and Child is inspired by actual events and set in late 19th Century Dublin.

Rodrigo Garcia's Albert Nobbs stars Glenn Close, Janet McTeer, Mia Wasikowska, and Aaron Johnson, and lacks a dramatic focus because of how the filmmaking doesn't prioritize a seemingly thoughtful storyline about two women who have lived their adult lives as men.

That's not to say that Close and McTeer won't raise eyebrows with their contrasting persuasive performances as the titular, unassuming mousy upscale hotel worker and a more vivacious, cigarette-smoking visiting housepainter in Hubert.

Close and John Banville are the scribes who set out an intriguing premise as Albert toils to try to get in the retail tobacco business and willingly has Hubert, who is seemingly happily married, as his new roommate. The plot hinges on Albert's interests in Wasikowska's hotel maid Helen, who, in turn, in besotted with a handyman, named Joe, played by Johnson (X-Men: First Class and Nowhere Boy). It also works complexity into the setting by locating a humanity through the identity turmoil which doesn't necessary pin down a particular socioeconomic group.

But, perhaps to widen its demographic, Garcia can't make the sum of some lovely parts as poignant as it may have come across on the page with much attention to the ardent entanglement between Helen and Joe. That's not to say Wasikowska (very good in Jane Eyre and The Kids Are Alright) and Johnson aren't the kind of rising actors who can lend versatility and support. The introspective, main arc of Albert is diminished, even if Close (who did this part on Broadway some 30 years ago) is very effective in a part that conveys emotion through quiet cunning and restraint. There is raw candor between Nobbs and Hubert as McTeer (remembered for her sharp turn in Tumbleweeds a while back) makes the character's mature, aggressive qualities snap in telling scenes with her five-time Oscar-nominated costar.

So, Albert Nobbs just can't deliver on some notable scenes, especially a perambulatory one with frilly outfits and Hubert's divulging, losing its grip so to speak on the effect of a detachment from femininity. Still, even if one can't bear that Close and to a lesser extent McTeer don't resemble the opposite sex as seen by other characters, there is nothing slight in how their performances measure up to the material and execution.