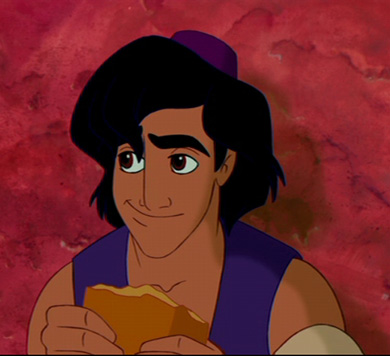 
Give yourself and the kids an early holiday present and go see Walt Disney's wonderful new animated film.

Aladdin and his pet monkey live in the shadow of the magnificent castle of the Sultan and his beautiful daughter, Jasmine. The Sultan is busy trying to find a husband for his daughter, who has a mind of her own and will marry only for love.

In the meantime, the Sultan's evil advisor, Jafar, and his constant companion, a fast-talking parrot (voice by comedian Gilbert Gottfried) are trying to get the magic lamp that is hidden deep in a cavernous sphinx. The sphinx appears in the middle of the desert with glowing red eyes and booming growl.

Jafar needs help to capture the lamp, because only a virtuous man can enter. He scans his crystal ball and discovers Aladdin to be his man.

Aladdin rubs the lamp by mistake and out pops a great blue genie who is really happy to be out of his cramped quarters. Robin Williams provides his unmistakeable voice and personality for the genie, who dominates the film. He changes form and does impersonations that I'm sure only the adults in the audience will recognize, such as Ed Sullivan, Peter Lorre and Rodney Dangerfield, but the kids still love every minute he's on screen.

One of Aladdin's wishes is to be transformed into a prince so he can ask for Princess Jasmine's hand in marriage.

The colors are splashy and bright, turquoise, yellow and purple are the colors primarily used. And the music written by the terrific song writing team of Alan Menken and the late Howard Ashman (Beauty and the Beast) is peppy, but lacks a memorable song.

Princess Jasmine and Aladdin are cute, but the thing Disney studios does best is when they draw inanimate objects or animals and give them human-like qualities, as they do wonderfully here with the parrot, monkey and an adorable flying magic carpet.

Some of the younger kids might be frightened by the sphinx and Jafar, who at one point changes into a snake. On the whole, the adventure/romance is funny and entertaining, and every minute that the genie appears, is full of high energy and laughs.