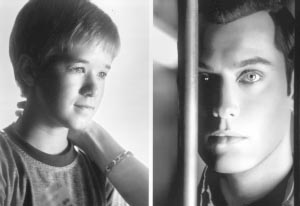 A.I. is not a sequel or a remake, but a science fiction fantasy intricately textured as a cautionary tale which synthesizes the power of love in a complex, somewhat unfriendly brave new world.

The late Stanley Kubrick had stated this ambitious project which Spielberg developed into something unlike his recent powerful works about the collective spirit of man coming to the fore to deal with the harshest of moments in history, as in Schindler's List, and Saving Private Ryan.  Underneath this new film is the darkly detached Kubrick mentality that brought some unsettling undertones to some of his masterworks like 2001: A Space Odyssey and A Clockwork Orange.  Thus, the collaboration is a tribute to a man whose last work was Eyes Wide Shut and becomes a wondrously startling embodiment of a quest for an undying love.

What Kubrick would have admired about his more humanistic contemporary, is the casting of Haley Joel Osment in the key role of David, which helps a lot with stellar digital effects and an elaborate production design.  Hollywood hasn't neglected the near future of genetic technology and synthetic living reproducible beings with passable pictures like The 6th Day and Bicentennial Man.  But with the collusion of two seminal authors and dissimilar outlooks, the chemistry of the elements of E.T. and The Shining offers warm but harrowing insights into the future of man.

Central to A.I. is the means to advance cyborg technology to the capacity to love, an emotion which many humans never truly know.  At Cybertronics Manufacturing is William Hurt's top research scientist, Professor Hobby, and his work reaches moral complications as a special robotic being becomes a nearly two-year project.

Osment's David is their robotic kid with the scientific input to love.  The young prototype is adopted by Henry (Sam Robards) who happens to be a Cybertronics employee to console his wife Monica (Frances O'Connor) as their terminally ill child is cryogenically incubated while doctors fervently work on a cure for his cancerous disease.

The social adaptation for David finally works out after some creepy moments with Monica as she goes about her daily routines with the Kubrick-like sterilized domicile.

The Swinton's afflicted son Martin (Jake Thomas) amazingly gets better and David, the loud laughing, intensely gazing, cyber-kid, is sent out by Monica to find his place in the world, with his super talking bear toy named Teddy.

The complicated, but intelligent screenplay by Spielberg, his first since 1977's Close Encounters of the Third Kind emerges as a chilling version of Pinocchio that will touch some viewers and perplexed others.  Attempting to tune in the kind of odyssey that Kubrick would have made for David with the pursuit of becoming a real boy who could be loved back by a mother he desperately needs is the dilemma to fuse A.I. with real emotion that transcends an artificial aura.

In David's journey through a tawdry Hades, robots are debased servants for the humans who can love or loathe them.  And the tour, with Jude Law's sex fulfilling animatron, Gigolo Joe, accompanying him, as his on-the-lam love machine, has some brightly perverse visits.  One is the Oz-like Rouge City, the artificially hued, decadent haven where David can find the all-important Blue Fairy from a hologram voiced by Robin Williams.  The "mechas," mechanical robots, are abused and treated like derelicts for the appeasement of humans in a carnival-like Mad Max like sport at the "Flesh Fair."

At last, David reaches an underwater Manhattan, part of the effect of global warming.  His feelings about the Blue Fairy's magic could make him into an "orga" organic human boy.  But as he reaches his destiny, he witness the fate of another life form.

The scope of A.I. seems to be like the Web as it exponentially broadens from intimate dramas which Osment last shined until the end in Pay It Forward to an odd travelogue finally culminating in a mysterious, but mystical world.  Part of the creative ingenuity revolves around robotics with junkyards of absent limbs and body parts as Spielberg envisions a less visceral, synthetic Gladiator for some of the memorable confrontations.

In tandem with his long-time production collaborators, like photographer Janus Kaminski, effects artist Stan Winston, and designer Rick Baker, Spielberg breaks new ground under Kubrick's haunting tutelage in terms of the negative implications of science and human behavior.  He can't let go totally of his heartfelt sensibilities as John Williams' uplifting music is modulated to shine a light and shed a tear for a thoughtful star child of Kubrick's afterlife whose eyes aren't always wide shut.

Stanley Kubrick worked on this project for 15 years, and after his death, Steven Spielberg (with the help of Kubrick's paperwork and drawings) finally finished the screenplay and made the film.

With two such different stylists, you could almost guess that Kubrick was responsible for the edgier characters and scenes and the softer, more sentimental ones, belong to Spielberg.

Based on "Super-Toys Last All Summer Long," a short story by Brian Aldiss, published in Harpers Bazaar in 1969, the story begins in the future with a scientist (played by talented William Hurt) who works for a cyber-lab, addressing his co-workers.  He wants to make a new model of advanced machine (or "Mecha"), a "robot child who can love."  The robot is named David, and who better to play him but the extraordinary child actor, Haley Joel Osment.

A couple whose own ailing son is frozen and awaiting a cure, is chosen to be David's parents.  They are warned that once he's "imprinted" by the mother (Frances O'Connor), he will become committed to her for life.

David soon bonds with the mother and everything is fine, until their real son recovers and comes home.  There's jealousy and a couple of mishaps and before David knows it, he's dropped off in the woods with only a mechanical teddy bear for company.

David begins to search for the Blue Fairy from the "Pinocchio" fairy tale.  His mother read the story to him in happier times, and David believes that if he could just find the Fairy that she would make him into a real boy, and his mother would love him again.

David's search takes him through some pretty dreary situations.  He gets picked up by a giant moon-like flying machine that sucks up outdated robots.  He's taken to a Flesh Fair, a slimy carnival where broken mechas are tortured then destroyed while humans cheer from the sidelines.  He's also taken to Rouge City, a sex crazed adult playground by Gigolo Joe (Jude Law), a love machine for lonely women.  Joe thinks that David can find his Blue Fairy there.  Only in a collaboration of Kubrick/Spielberg could you find the answer to the whereabouts of a Fairy Princess amidst an adult sex world.

The look of the film is fantastic.  Each set is a unique world of its own.  Especially the depiction of an underwater Manhattan.

Once again Osment proves that he is a very special actor.  He perfectly meshes the awkward jerky moments of a mechanical robot with the sweet, loving neediness of a young boy.  It's an Oscar-worthy performance.

This is a much darker film than I expected and certainly not one for kids, even though the trailer misleads by saying that it's from the director of E.T., giving the impression that its about a cute little alien robot.

Spielberg's latest product is ambitious, disturbing, and fascinating, but to me, it was too dark to be enjoyable.