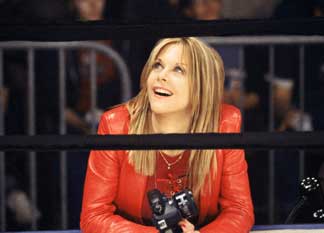 If Meg Ryan were looking for parts that differentiate her from the youthful bubbly work in her earlier career, Against The Ropes is perfect transition. Her role as the real life First Lady of Boxing (Jackie Kallen) ranges from comedy to angry drama and she does it all in very fitted mini-skirts.

We first meet Jackie in 1972, a young blue eyed blond little girl staring into the boxing rink watching and absorbing to the dismay of her father who doesn't expect her to be involved in boxing. It's a tough man's game.

Much of the film revolves around Cleveland, perhaps reflect the limited role of boxing in the world of sports today. The days of Mohamad Ali and Joe Lewis who were household names as world heavyweight champions have long passed. Who can name the champ today? That fact may have helped or hindered Kallen's options in the sport. But we learn from Ryan's performance and Kallen's book that she is as determined to use her knowledge and skill in the sport to break into the men's club.

Boxer, Shaw has no confidence in her and little polished skill in his sport. That is before the two build a personal relationship. Charles S. Dutton's Felix Reynolds who is working at the office of the state registry of motor vehicles, has the long time experience to train the angry young fighter.

He is willing to help because your dad helped me I'll help you.

Over a short time they fight in Buffalo and other locations, she saves a fight with the right orange juice and Luther begins to see her as a mother figure. But conflict arises when she becomes the media star and he is simply the product of her glory.

Dutton doubles as the director and moves Ryan as a sassy confident woman who is convinced she knows more than many of her male counterparts. When she enters a room everyone looks and it doesn't bother her as the good old boys watch her rear end. Epps is very convincing as a young powerful skilled fighter who doesn't know his way and reacts in anger rather than with the tools at his disposal.

But Dutton's directing skill plays best during the climatic and effective Rocky like big fight scene in which Epps must prove himself. The choreograph is spectacular and Ryan's dramatic run to the ring grips us and we can't help cheering for both underdogs.

Against The Ropes, looks sharp, feels sharp and is sharp.