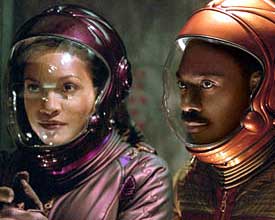 The Adventures of Pluto Nash

The Adventures of Pluto Nash, staring Eddie Murphy, is nothing more than an adventure in futility.

Having been on the studio shelf for more than two years, this film, if one can call it that, is so bad they did not even screen it to film critics in advance.  Believe me, they knew it was bad, but after sinking a reported 90 million dollars into this multi-starred vehicle, they had to try and get back a few of the dollars invested.

The film is about Pluto Nash (Eddie Murphy) and his attempt to run a legit dance club on the moon after being released from jail on smuggling charges.  The club is successful and soon the moon mob wants it and ends up destroying it when Nash refuses to sell.  Interesting premise - a moon mob.  Too bad it dies as a premise.

With additional star power of Randy Quaid as a robotic body guard to Nash, Pam Greir as his mother and John Cleese as an intelligent car and many other A list talents this film should have been something.  Problem is that the something it turned out to be is trash.

This film should probably been more aptly named The Adventures of Pluto Trash as it is not funny, the special effects are horrible, the script is nonexistent and the characters as one dimensional as cardboard cutouts.

In all my years of film review, Ive only walked out on one film, Show Girls, but this Pluto Nash was within seconds of having me do the same here.

Don't waste your money on this, it will only reinforce to Hollywood that even a bad film can get some of its expenses paid out of our pockets.

As always keep the popcorn warm, the soda cold and look for me in the back row, three seats in.