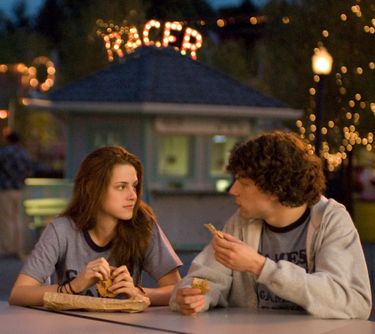 
This amiable summertime-set picture in Pittsburgh has some hazy, idle kinship with last year's The Wackness without the hip-hop sultry backdrop or the psychoanalysis. Though it boasts a plethora of agreeable tunes that complement the youthful mischief.

Greg Mottola's Adventureland takes place in 1987 and is based on his personal time at a Long Island amusement park. This spry, if tacky escapade has some zany appeal and a likeable cast, led by Jesse Eisenberg and Kristen Stewart, who is fully immersed in the Twilight of her career.

Eisenberg's James Brennan is the director's surrogate, having to settle for a low-end summer job at the titular western Pennsylvania hangout with plans for a European vacation and Columbia graduate school hanging in the balance due mostly to his troubled father.

Based on James's "condition" after undergraduate college life, the milieu may take on a Superbad vibe for some, though the same steady stream of humor doesn't nearly have the same effect. He gains the attention of his co-workers and insecure Em Lewis (Stewart) because of the kind of supply that could make him easily fit in with the cast of cable television's "Weeds".

Ryan Reynolds is mostly understated older guy, Mike Connell, who is also having relations with Em when he isn't being a utility guy at the park, jamming with other musicians, or serving as a confidante for the enamored James.

Mottola allows enough crassness and listlessness to liven up the proceedings which is fueled by the requisite use of drugs and alcohol. It allows for at least some of the characters to find their way through their banal, personal doldrums.

While Reynolds may seem miscast to some or feel like a narrative pawn, perhaps more plausible backup comes from Margarita Levieva as the coquettish, if pious Lisa P. Better, or the drug-addled, nerdy Joel, done with much comedic energy and anti-anti-Semitism by Martin Starr, while Bill Hader and Kristen Wiig as prideful park owners Bobby and Paulette instill their snappy, askew brand of wit.

This semi-autobiographical account operates with enough attitude into the emotional strains of James and Em, with Eisenberg (very good in The Squid and the Whale) settling down better for the viewer as the character feels more at risk. Stewart (Into the Wild) efficiently hones into an insecure, yet beguiling young woman with steely earnestness.

Mottola knows what buttons to push to make it all go down fairly easy, not that scatalogical or below-the-belt, though it doesn't have the kind of genuine, goofy spark, turns, and surprises that amusement park fans love most about their favorite rides.