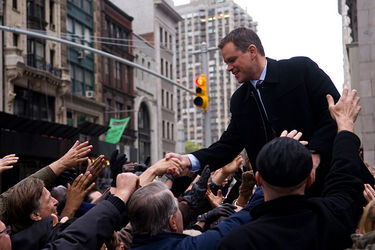 
This unstylized, sci-fi-ish thriller opens things up, at least melodramatically, from the Philip K. Dick short story from which its based. Too bad there could have been a deviation from the plan to have it appear on the movie schedule for Valentine's Day weekend.

Matt Damon (Hereafter) and Emily Blunt (Gnomeo & Juliet, The Devil Wears Prada) toplines The Adjustment Bureau which was pushed back from last fall maybe due to its political backdrop or timing considerations with the former's thoughtful, if tedious collaboration with Clint Eastwood.

It does look well on the big-screen, especially from the careful handling of a few campaign scenes in the great city of New York. And, some clips feature brief appearances by Jon Stewart, Mary Matalin, James Carville and Mayor Bloomberg, among others in the political spectrum.

Nevertheless, writer/director George Nolfi engages a romantic element within the clash of free will and determinism; perhaps ultimately to a kind of serendipity that might be magically realized too much for its own good. In this case think of an intriguing, if more elemental taste of Inception or The Matrix crossed with something like Charade. Some fans of the intellect and the mystical may even be reminded of Alex Proyas's Dark City.

From the outset there are men in fedoras and gray suits alarmingly in control of humans (brains are scanned and re-calibrated if necessary). Ambitious man-of-the-people "GQ"-type New York Senate candidate David Norris, a well-cast, fairly charismatic Damon becomes smitten with Blunt's mysteriously engaging, candid and vulnerable in-training ballet dancer Elise Sellas during election night when he loses the race.

But, in a gradually elucidative, frantic tale filled with dimensionally surreal doorways that leads to a pat, if proficient deus ex machina, the titular manipulators (changed from its antecedent "Team" to give it more of a governmental, Big Brother stamp) become very concerned about David in spite of what the polls say (after a defaming New York Post front page).

One of the first big set pieces in a film that mechanically cuts-to-the-chase, so to speak, includes David being warned by one driven Bureau boss in Richardson (Mad Men's John Slattery in a high-rise warehouse floor level) not to "deviate from the plan." It means that David can't continue pursuing Elise for the sake that he can't go places. In time, Richardson will have to clean up a mess contingent on getting the rerunning candidate some speech time away from a practicing dancer for the Cedar Lake company.

But an obvious sensibility consistently undermines what a lively (with some f/x flourishing) production and a sincere Damon and a piquant Blunt offer as a meeting place with the urbane, articulate folks in hot pursuit becomes crucial for David and Elise. Maybe the intentions of an elaborate scenario are more than what can be successful replied here in such a manageable run-time. When it comes to being in control of where we're headed versus the sacrifice and will for what is fulfilling and everlasting.

Yet, with angled audacity The Adjustment Bureau has some action-packed advantages from the tweaking of an untimed car accident or a spilled cup of coffee. Anthony Mackie's Harry (assigned to David and fond of his deceased relatives) becomes a more useful (guardian angel) adjuster (initially after dozing off on a park bench) and Terence Stamp's Thompsen more ominous with his steely, cool top brass stentorial approach most notably in a hospital waiting room scene. Also appearing with some regularity is David's campaign chairman, confidante and venture capital firm entrepreneur, Charlie Traynor, a genial Michael Kelly (Dawn of the Dead)

What simmers smartly before all the doors are open and shut from the substrate of Lower Manhattan and Elise holding her hands on her head with helplessness really bogs down on what lies in store when chance and destiny collide. The elegant compositions and details of this Bureau with their "electronic map books" hurtles with conventional adjustment down the stretch through a metaphorical cosmic-like maze never truly ensuring an inception of mesmerizing romantic fantasy.