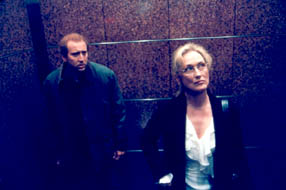 The re-teaming of screenwriter Charlie Kaufman and director Spike Jonze from Being John Malkovich is the wildly humorous, bizarre creation entitled Adaptation.

It stars Nicolas Cage, Meryl Streep and Chris Cooper (American Beauty) who really adapt to all the craziness that's as authentic as Malkovich was back in the fall of 1999.

In Adaptation, Cage is Kaufman, and Jonze rewinds things very amusingly to a trip back to the filming of Malkovich.  Now, Kaufman's latest assignment is to adapt a non-fiction, un-chronological tale by Susan Orlean, played wonderfully by Streep, called "The Orchid Thief."  The book concerns one Floridian flower-breeding John Laroche, a scruffy Cooper, who doesn't have his front teeth, and longs for a special "ghost orchid."

Complications arise from Cage's second role as Charlie's twin brother Donald, with a similar balding, overweight appearance.  But, Donald has a knack for attracting women.

Adaptation doesn't hold exactly true to Kaufman's actual existence as he doesn't have a Donald.  But, Charlie's more outward self has just been under the tutelage of master scenarist Robert McKee (Brian Cox of The Ring) and is ready to spice up a recipe with his twin that inverts profitable, mainstream notions of a adapting to film.

Jonze has a gift for staging the passions of a lively, outrageous writer and Cage surprisingly energizes the neuroses of two disparate individuals.  Streep adroitly hones in to various humorous shadings of the reel and real worlds.  Just like her, Cooper knows how to charismatically flex far from his typical characters.  From the portals in Malkovich to a birth canal in Adaptation, the ability to go into yourself on your work is gracefully handled with originality into feelings of obsession and self-doubt.