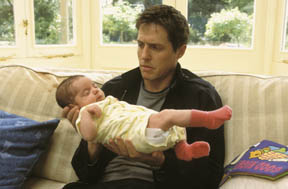 In the wake of the highly anticipated summer movie juggernauts, About a Boy is like a blip on a radar screen.  But, this undeterred effort from brothers Paul and Chris Weitz shines because of the effect of two characters, played by Hugh Grant and the much younger Nicholas Hoult, in a comedy ultimately about people needing people.

The Weitzs, known for the raunchy hit American Pie, shift the best-selling novel from Nick Hornby to England with surprising insight and wit as the opening alternates between the lives of Grant's Will and Hoult's Marcus.

Will comes across as a Londoner at 38 who revels in his cool complacency, living the rich bachelor life from the royalties of his father's big Christmas hit.  He likes to date women and stay away from obligations, like kids.

He sets his sights on single mothers and makes up a fictional toddler for the single parent support group he joins (SPAT-Single Parents All Together).  He captures the attention of the blonde Susie (Victoria Smurfit) who brings along the 12 year old Marcus, an outcast at the private school he attends.  His eyebrows curl up and his lips are reddish.  And he signs in class involuntarily, a sort of day dream.

The mature script which feeds the performances of Grant and Hoult, has Marcus' divorced, teary mother, Fiona (Toni Collette) attempting suicide and raced to a hospital.  The adept, consistent use of voice-overs, cutting throughout between Grant and Hoult, underlines a sense of concern.

Then, after some matchmaking by Marcus to help his chronically depressed mother, the bullied kid prods his way into Will's stylish flat.  And they watch the TV game show "Countdown" together.

The lie about Ned is finally uncovered, but another venal one evolves because of the feelings he has for the peculiar preteen.  When he tells Marcus of his love for artistic professional, Rachel (Rachel Weisz - The Mummy), the kid agrees to the request to be his son.  But after things go well for a while an intimate dinner has painful emotional consequences.

Astute direction capitalizes on the strange bond that works during confrontational moments or during a performance of "Killing Me Softly," a song dear to Fiona's heart.  The Weitzes tap into character vulnerability and create funny scenes from out of the blue.

As the sorrow and joy come into these characters, Grant's timing and wit add up convincingly opposite a sometimes lost but very appealing Hoult who shows much depth as a young actor.  Effective support by Collette and Weisz in smaller roles add to a movie unafraid to commit with veritable emotion into how a selfish slacker and crooning pariah find what is necessary to do about a boy.