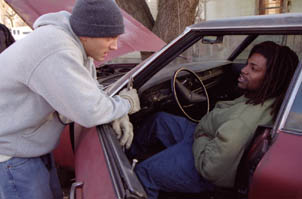 While this film has a socially important story behind it and the star power of one of today's premiere rappers, Eminem, I can not help but draw out the similarities of a film from many years back.  That film is Flash Dance.

Both films are about a wanna be star whose life would be turned around by their special talent.  Both main characters are from the wrong side of the tracks and both characters work menial jobs to pay the bills.  In Flash Dance, the star was a welder; here we have Eminem as Jimmy Smith, Jr. fondly called Bunny Rabbit.  Smith has a talent for rapping and aggression, all the while feeling sorry for himself.  In theory this is a quasi biographical story of the life and times of Eminem showing that anyone can catch a break and become a star.

Staring Kim Basinger as Eminem's mom, Brittany Murphy as his love interest and Mekhi Phifer and  Taryn Manning  filling out the cast, this film shows the desperation of trying to fit in as a white man in a predominately black art form, as well as wanting to get out of a life that has been hell.  This is not a concert film, though Eminem delivers some good examples of challenge rap, this is a film of growth and temptation.  Eminem has to choose between getting a break via local thugs and worse or working hard and cutting his own demo record with his own money.

The real problem here is the word "fuck".  I can not remember a film where I have heard it used to a point where the shock value was lost as it is here.  "Fuck" is simply another way of expressing emotion here and its use should have been sparse and pointed.  My real dismay came when I saw parents with six, seven, eight, and nine-year-old children sitting there as though this was an everyday event.  I can only hope that this is not an example of child rearing today.

Once you get past "fuck" every 30 seconds, you find Eminem delivers a solid performance here and his interaction with his screen sister is tender and ever so real.  I know his real life daughter is a huge part of his life and hope he continues to deliver a message on screen and through his lyrics of positive fatherhood and responsibilities that accompany it.  The balance of the cast is very good with the exception of Basinger who seems lost in her character, the white trash, trailer dwelling tramp.  Her accent is lost at times and her over the top reactions seem absurd - perhaps poor writing as she has done better with less.

In short, this is a feel good film about a now popular rapper and how life in the city, on the streets and clubs is hard, cruel and if one has the talent, the drive and a lot of luck, he or she may one day crawl to the top of the charts.