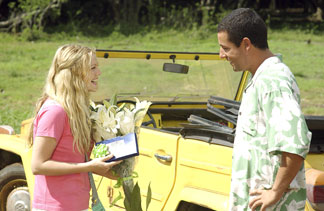 Adam Sandler and Drew Barrymore co-star for a second time (The Wedding Singer) as a couple in a romantic comedy.

Sandler plays Henry, a marine veterinarian at a Sea World style park in Hawaii. He's a single guy who blows off the women he dates by telling them he works for the C.I.A., and then quickly disappears out of their lives.

He's content with his love life until he meets Lucy (Barrymore) sitting in a thatched roof café. He joins her and they make an immediate connection. So much so, they agree to meet the next morning for breakfast. When Henry shows up the next day, Lucy acts like he's a total stranger.

In fact, he is unrecognizable to her, because she suffers from short-term memory loss after a car accident the year before. To protect her, her father and brother (Sean Astin) go through an elaborate daily charade in order to recreate the day before her accident.

For someone who has avoided commitment, dealing with Lucy and her problem might appear monumental for Henry, but he falls for her so completely, he's willing to invest the time to make her fall in love with him for ever.

Everyday Henry comes up with new ways for Lucy to bump into him. One day he's a mugging victim who needs rescuing (his friend played by Rob Schneider acts as the weird assailant), or he pretends that his car is broken down, anything to get her attention. It's a nice concept, wooing her over and over again, it's what any girl would want.

Schneider provides some of the more obnoxious behavior that Sandler is usually associated with, except for a nasty scene involving a vomiting walrus.

As a comedy it doesn't always work, there aren't enough funny moments and some of the jokes fall flat. Where 50 First Dates does succeed is as a pure, sweet love story. Barrymore is girlish, flirty and adorable and she has wonderful chemistry with Sandler, who is especially vulnerable. Together, they act like they are having a great time and the feeling rubs off on the audience.