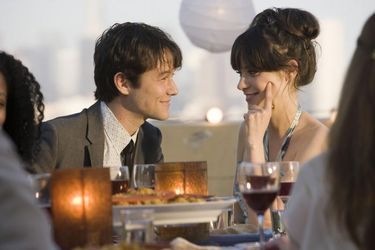 
This ebullient, somewhat pretentious (mostly in a good way) romantic comedy gives effortless meaning to "having loved and lost, rather than not loved at all". It's an offbeat, yet authentic journey twisting highs and lows with unpredictable verisimilitude.

(500) Days of Summer stars Joseph Gordon-Levitt (The Lookout) and Zooey Deschanel (Almost Famous) and is unchronological and eclectic as it ponders, but hardly meanders in not being a "love story".

Gordon-Levitt's contemporary Don Quixote in Tom is an engaging sort who turned out to have all a calling in the greeting card business rather than what architectural school said he should be.

The cute anthropologically observant voice-overs let the "cosmic collision" Tom and Deschanel's adorably preternatural Summer take flight like a helium balloon. She happens to be that new assistant who steps into the conference room one day right off a plane from Michigan.

Director Marc Webb works nicely from the downtown Los Angeles setting for a nostalgic feel for skyscrapers and a congested skyline as he handles the Tom/Summer dynamic with platitudinal dexterity. It negotiates a Henry Miller remark about a woman with broken-hearted allure with a kind of swifty, breezy smittenness about it.

Being with what you feel is a soulmate from a spot on a scenic park bench lets one get into emotional state of the characters as one doesn't feel the same way about the other. The title references how long Tom is able to keep Summer, as Deschanel (much better here than in Yes Man and closer to the barely viewed All The Real Girls) provides an unusual coquettish candor into a woman that would make one understand how a guy like Tom could get messed-up and bummed out. Even Summer reminds the hapless copywriter and hopeless romantic, "relationships are messy and feelings get hurt...instead let's have as much fun as we can."

Tom is blindsided after Summer dumps him and he wavers back and forth to various moments of their 500 days "together" to try and understand what went wrong. Self-analytical and reflective from the guy's perspective, the emotional gamut recalls some of the ideas conveyed in a Woody Allen picture, especially in the 1970s.

Some of the visual and aural elements might be too thematically illustrative and self-posturing, especially an animated bluebird. Yet, through the time leaps, karaoke tunes, and split-screens, among other cinematic devices, a relationship gels in similar ways to the recent winning, if undervalued Nick and Norah's Infinite Playlist and Zach Braff's gratifying Garden State. Tom is surrounded by familar suffering, slovenly types that add to what clusters and complicates the allure in his life, and much atmosphere comes from the soundtrack with cuts from artists like the Smiths and Belle & Sebastian.

The filmmakers and scenarists Scott Neustadter and Michael Weber (The Pink Panther 2) artfully and honestly suggest something relevant to The Graduate and a French artistic movement (see The Dreamers). With its unconventional structure and art deco admiration, among other artistic choices, (500) Days of Summer will probably be forgotten a lot sooner than Tom has Summer. But, with two stars doing what they do best away from the studio system (see Mysterious Skin and The Good Girl), there is something neat and heartfelt alongside love which didn't last, but ignites a new hope from elevating love to allegoric and metaphoric levels.